Record-breaking Kospi has many hoping for more

Record-breaking Kospi has many hoping for more 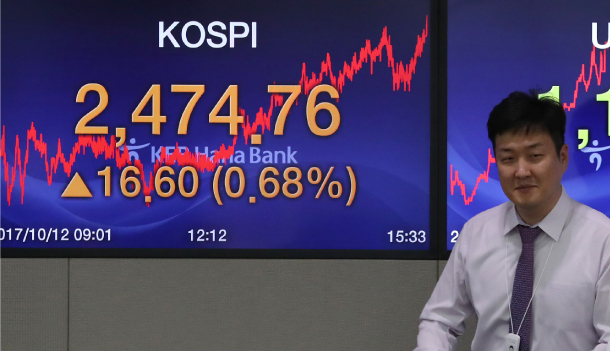 A stock market board at KEB Hana Bank’s main branch in central Seoul shows the Kospi closing at 2,474.76 on Thursday, the second straight day that the index reached a new record. [YONHAP]

The Korean stock market’s main index reached another all-time high on Thursday, breaking a record set the previous day and raising expectations that the Kospi might surpass the psychologically significant 2,500 level soon.

Purchases by foreign investors have driven the record-breaking performance of the past two days, despite continuing concerns about geopolitical tension on the Korean Peninsula, including the recent flight of U.S. bombers over the peninsula in a second show of force since the same bombers flew north of the demilitarized zone on Sept. 23.

The Kospi ended Thursday at 2,474.76, up 16.60 points, or 0.68 percent, from the previous session, when the board also broke a record. It was the first time the Kospi had broken a new record in two months.

Between May and July, the stock market closed at record highs almost every day on positive expectations for the newly-elected president, Moon Jae-in, after months of uncertainty following the impeachment of his predecessor, Park Geun-hye.

Before the wave, the last time the Korean market reached an all-time high was in May 2011.

However, in August, the market, burdened by the continuous upswing, began to take a breather.

Around this time, Moon’s administration announced the toughest regulations yet on the local real estate market, and North Korea upped the ante on its nuclear threats, firing missiles and testing a hydrogen bomb on Sept. 3. This increased uncertainty held back the Seoul market.

But after a 10-day holiday, the market reopened on Tuesday to stronger signs of vitality, largely contributed by increased buying from foreign investors. In the past three trading days, they have purchased nearly 1.8 trillion won ($1.59 billion) in Kospi stocks.

Market analysts cited expectations of better-than-expected third-quarter performance at Korean companies as well as improved outlook on the local and global economies as the main contributors to the recent upswing.

Lee Kyung-min of Daishin Securities projected the Kospi might continue to rise, adding that Korean stocks are attractive investments because they are still undervalued.

The analyst speculated that the Kospi could reach 2,500 in a short period and even surpass 2,600 by the end of the year.

However, there are also growing concerns over the excessive imbalance of stocks that investors are scooping up.

Foreign investors in particular have a penchant for large-cap IT stocks like Samsung Electronics, whose third-quarter performance is expected to reach a new record thanks to growing demand for computer chips.

Although the Kospi’s tech stocks performed moderately on Thursday, foreign investors have been buying a massive amount of them since the holiday ended.

In fact, on the first trading day when the market reopened, foreign investors spent 326.2 billion won on tech stocks, accounting for 40 percent of the 819.4 billion won they purchased that day.

The buying caused the share price of SK Hynix, a major manufacturer of computer chips, to reach a record high, which it then promptly broke the following day.

Most analysts believe this love affair with tech stocks will continue.

“With the global IT industry in a favorable situation and expectations of Korean IT companies’ third-quarter operating profit rising, for the time being, foreign capital preferring risky assets will continue,” Moon Nam-jung at Daishin Securities.

As of Wednesday, foreign investors account for 37.9 percent of Kospi investors.