A nighttime stroll through history : Jeong-dong Culture Night will celebrate 120 years since the founding of the Korean Empire

A nighttime stroll through history : Jeong-dong Culture Night will celebrate 120 years since the founding of the Korean Empire 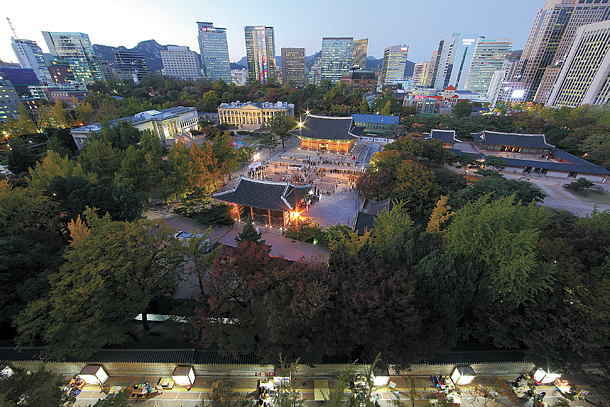 On Oct. 12, 1897, King Gojong became Emperor Gojong when he declared the establishment of the Korean Empire at the Hwangudan Altar, which was located just south of the Gyeongbok Palace, central Seoul. This year marks the 120th anniversary since the birth of the Korean Empire was proclaimed, and Seoul’s Jung District Office is holding its sixth “Jeong-dong Culture Night” where citizens of Seoul can walk through cultural assets that are spread across the historical neighborhood of Jeong-dong.

The Jung District Office held an opening ceremony on Friday night at the Deoksu Palace, which was followed by a nighttime program of cultural entertainment featuring: Night Blooms, a tour around Jeong-dong’s cultural institutions; Night Alleys, a tour around the sites of Jeong-dong; Night Stories, nighttime street performances; and Night Delicacy, a chance to enjoy traditional snacks to go with a meaningful evening.

In its third year, the event has been held twice a year during the last weekends of May and October since 2015. This season’s schedule has changed to celebrate a significant page in the Korean history.

The Korean Empire, or Daehan Empire, was established during a time of great national turmoil during the late 19th century, when the peninsula was forced to open its doors to Japan and Western countries. Declaring imperial status was an effort by the king to stand firm against foreign invaders.

Saturday is packed with events not only organized by the Jung District Office, but also by the Seoul Metropolitan Government. On Saturday morning from 10:30 a.m. to 1:30 p.m. at Seoul Plaza in central Seoul, the Seoul Metropolitan Government will hold a reenactment of the proclamation of the Korean Empire, a project in the name of “The Day for the Beginning of the Great Korea.” The program includes the Imperial Procession, Ritual to the God of Heaven, the Coronation Ceremony, The Proclamation of the Empire and the Imperial Ritual Ceremony.

Jeong-dong Culture Night begins after the ceremony, when cultural institutes across Jeong-dong open their doors to the public. Visitors will get the chance to take a peek inside buildings they have not been able to step inside of in the past, such as the Canadian Embassy, or the assembly room at the Seoul Metropolitan Council. A total of 35 cultural institutions will keep their doors open until 10 p.m., such as Deoksu Palace, the Seoul Museum of Art, Jeong-dong Theatre, Seoul Museum of History and Seoul Cathedral Anglican Church of Korea.

The programs that take place later in the evening are intended to take visitors back in time, to when the people of the late Joseon Dynasty (1392-1910) would have felt a sense of awe towards their majestic Emperor Gojong, and the rituals that took place on Oct. 12, 1897.

People can make their very own jade-colored lanterns which adorned the walls of the capital on the historical day. Children can use their hands to create a mini version of the car that Emperor Gojong rode around the city in. In the Deoksu Palace, visitors may try on the hanbok (traditional Korean dress) that the royal family wore while greeting foreign visitors, and take photos of themselves inside the palace walls. 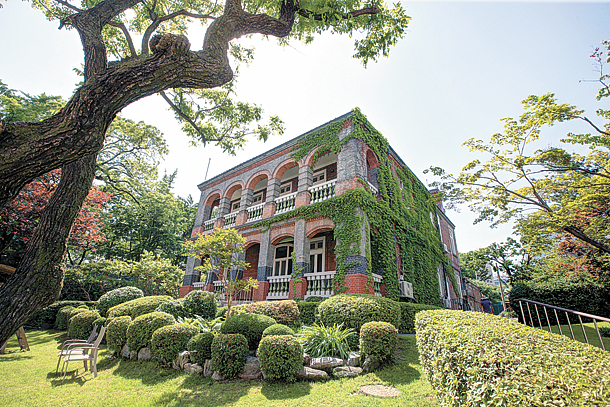 The British Embassy, pictured above, opened its doors to the public and allowed passage through its garden for the Jeong-dong Culture Night on Friday. [JUNG DISTRICT OFFICE]

Around 8 p.m. a series of performances will begin to create a celebratory atmosphere for the evening. Pansori (traditional Korean opera) played by traditional instruments from Europe will be staged at the Deoksu Palace at 8 p.m., as well as an outdoor gugak (Korean traditional music) performance at the Former Russian Legation at 8 p.m. and 9 p.m.

The event’s brochure allows for people to enjoy their time at other spots at a discounted price. Grevin Museum, a waxwork figures museum in central Seoul, will give visitors a 5,000 won ($4.42) discount.

The NH Art Hall will give the visitors a 50 percent discount on the gugak musical, “Fanta Stick,” which usually ranges from 40,000 won to 60,000 won. The Seoul Biennale of Architecture and Urbanism will allow the visitors to step inside the Donuimun Village for just 3,000 won.

It may not be a part of the program’s official offerings, but visitors are encouraged to visit the Hwangudan site near the Seoul Metropolitan Government building. Although now it’s demolished, Hwangudan used to stand where the Seoul Westin Chosun Hotel currently stands, and was a place where all the kings of Joseon came to pray for the well being of their people.

“We made a big change in moving the date forwards to coincide with the proclamation date of the Korean Empire,” said Choi Chang-sik, the head of the Jung District Office. “We hope the visitors enjoy the beautiful autumn night and the diverse programs we’ve prepared, but we also hope that they remember the forgotten history of the Korean Empire.”