South, Australia band together against North

South, Australia band together against North 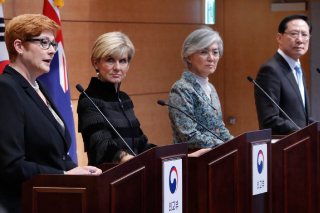 Foreign Minister Kang Kyung-wha and Defense Minister Song Young-moo met with their Australian counterparts, Julie Bishop and Marise Payne, in Seoul for the third biennial “two-plus-two” talks, which were launched in 2013.

“We shared our deep concerns that the North’s nuclear threats have reached a level never seen before after its recent sixth nuclear test,” Kang told reporters during a joint press conference held after the meeting. “In particular, we strongly condemned the North for explicitly violating U.N. Security Council resolutions.”

“We also agreed that diplomatic efforts should be made to peacefully achieve a complete, verifiable and irreversible denuclearization... Both sides noted that sanctions and pressure against the North are diplomatic tools to make the North free of nuclear weapons.”

The meeting comes amid rising tensions sparked by North Korea’s continued provocations, including a series of ballistic missile launches and a sixth nuclear test held last month. A bombastic exchange of bellicose rhetoric between the leaders of North Korea and the U.S. has also heightened the tensions further.

Australian Foreign Minister Bishop reaffirmed her country’s commitment to working together with South Korea in countering the North’s nuclear and missile development aspirations. The minister also urged the North to come back to negotiating table to discuss the nuclear issue.

“We stand united with the ROK against the provocative and threatening behavior of North Korea,” she said. ROK stands for the Republic of Korea, the official name of South Korea.

“And we have a very significant discussion on the ways that we can work together through deep cooperation and collaboration with a view to deterring any future illegal test by North Korea and to compel North Korea back to the negotiating table with an aim of denuclearizing the Korean Peninsula,” she added.

The ministers stressed the need for a diplomatic approach toward the North and stably manage the security situation.

The Australian foreign minister, in particular, expressed concerns that excessive tensions and any possible military conflict on the Korean Peninsula should be avoided no matter what.

“Any military conflict on the Korean Peninsula will be catastrophic,” she said. “That is why Australia has joined the ROK and other nations, including the U.S., to embark on this collective strategy of maximizing diplomatic and economic pressure on North Korea. Our focus is to ensure North Korea back to the negotiating table as soon as possible.”