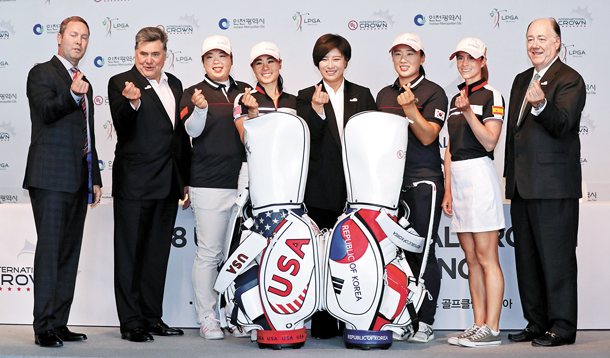 As Korea was selected to host the 2018 UL International Crown for the first time, a media day was held at Jack Nicklaus Golf Club Korea in Incheon on Monday, during which Korean golf legend Pak Se-ri was named an honorary executive director for next year’s event.

“I’d like to thank the organizers for giving me this honorary position,” Pak was quoted as saying by Yonhap. “As the quality of Korean golf improves, I realize we as a country are getting international recognition for our golfing prowess. I’ll do the best I can to contribute to golf not just in Korea but the rest of the world.”

Throughout Pak’s career, she has won 25 LPGA Tour events and qualified for the World Golf Hall of Fame at age 29. Since Pak first left to the United States in 1998 at age 20, she became one of the LPGA Tour’s top golfers by winning two of its major tournaments, the McDonald’s LPGA Championship and the U.S. Women’s Open.

A victory at the U.S. Women’s Open has allowed Pak to become the youngest player to win the event, and her victory in the 20th playoff hole is still considered the longest tournament in women’s professional golf.

With Pak’s victory at the 2007 McDonald’s LPGA Championship, she joined the World Golf Hall of Fame. And last year, upon completion of the KEB Hana Bank Championship, Pak concluded her career as a professional golfer.

“I have high expectations for this event in Korea,” Park said. “This is a competition on a far different level than regular tour events. This will be a small Olympics. I hope it will grow into an event that rivals major tournaments.”

The UL International Crown is a biennial team match tournament on the LPGA Tour among eight national teams, where four golfers represent each country.

“I still have vivid memories of the last International Crown, and playing for your country will just add to your patriotism,” Yang said. “There are so many great players from my country that I don’t know if I’ll have another opportunity. I’ll have to do my absolute best.”

The eight participating countries for the 2018 UL International Crown will be determined based on the total World Ranking points of the players by country after the 2018 U.S. Women’s Open in June. Four players representing the countries will be selected after the 2018 KPMG Women’s PGA Championship.

“More than anything else, most nations want their best athletes to play for their flag,” said Mike Whan, the LPGA Tour’s Commissioner. “In golf, you don’t get to do that very often. You might see your flag on the leaderboard, but it’s not the team competition.”