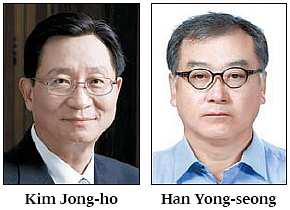 Creditors of Kumho Tire called in a former chief executive of the company in order to speed up the restructuring of the troubled tire company.

Kumho Tire said on Thursday that Kim Jong-ho was appointed by the creditors as the new president and CEO of the company. Kim oversaw the tire company from 2009 to 2012 when it was going through a workout program.

Along with Kim, Han Yong-seong, a former executive from Woori Bank, was selected as the vice president of Kumho Tire, the company said. Han was also a former chief financial officer of Taihan Electric Wire from 2010 to 2014, overseeing the restructuring of the company’s subsidiaries.

The appointment of Kim and Han will be finalized during a shareholders’ meeting on Dec. 1.