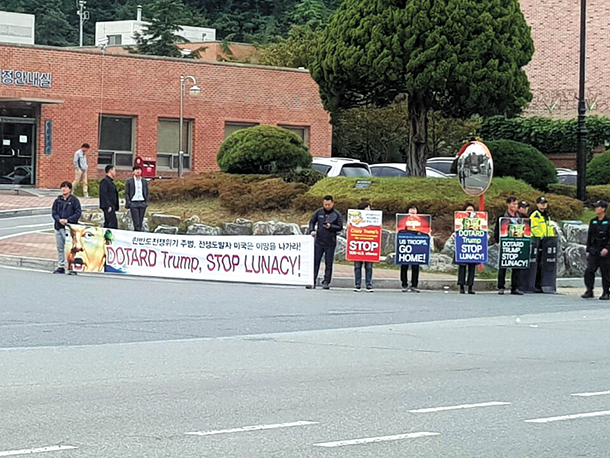 Members of Busan People’s Solidarity held a rally in front of the Fleet Command in Busan, holding up a sign that read, “Dotard Trump, Stop Lunacy.” The protest went on for a week. They not only used the word “Dotard,” which North Korea’s Kim Jong-un used to describe Trump, they also cursed in English to the U.S. naval forces working there. A complaint has been filed with the Nambu Police Station about the protesters using profanity.

The group also appeared at the 242nd anniversary of the founding of the U.S. Navy held at the Haeundae Hotel in Busan on October 14 with signs, “Dotard” and “Yankees Go Home.” Chargé d’Affaires Marc Knapper, commander of USFK Vincent Brooks and 400 members of the U.S. Fleet Forces Command were in attendance, and Busan Mayor Seo Byeong-su, ROK Commander in Chief of ROK Fleet and some 250 heads of local agencies were invited.

The entrance to the venue was chaotic as the protesters clashed with attendees. The Haeundae Police had a hard time clearing the route for the U.S. troops to enter the venue. The protesters continued the rally until 8 p.m., claiming that they would not condone U.S. forces enjoying a party after bringing a nuclear submarine to Busan on Oct.13 in preparation for a war.

The group opposes the aircraft carrier USS Ronald Reagan’s entry into the port of Busan and registered for a rally on Oct. 21. It also plans to continue an anti-American rally in front of the Fleet Command until Oct. 31.

Korea’s Constitution guarantees the freedom of expression and assembly, and a group with anti-American sentiment has every right to hold protests. However, the action can be perceived differently depending on the timing and location. Busan Mayor Seo Byeong-su, who attended the US Navy’s party on October 14, said that it was wrong to shout anti-American slogans and use curse words at the celebration, which was considered a birthday bash for the U.S. Navy, especially when a solid Korea-US alliance is important.

At this point, a unified stance on foreign policy and security is more important than ever. Many find that it is not desirable to hold protests in front of the U.S. forces using the vulgar expression that North Korea uses for the U.S. President. Hong Gyu-deok, professor of political science and foreign policy at Sookmyung University, said that the anti-American rallies by some groups may be seen as evidence of a divided national stance, when people should have unified voice on foreign policy and security, and asked the protesters to consider whether such rallies would help the national interests or not.