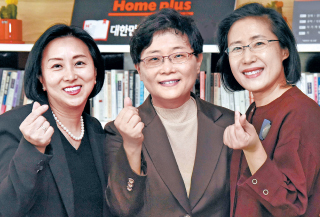 Homeplus is taking the lead in empowering women in the workplace, appointing Lim Il-soon as the company’s first female chief executive officer. Across the discount retail industry, companies have increased the number of female executives in their management, but Homeplus will be the first to have a woman at the helm.

Lim has broken the glass ceiling in Korea’s discount retail industry. At Homeplus, about 38 percent of department heads are women, as are more than half of executives at the director level. Not only the CEO, but also the chief commercial officer and chief human resources officer, both important figures in retail, are women.

Lim was nominated to the CEO post on Oct. 13. She previously served as Homeplus’ chief operating officer and chief financial officer, and is known for helping the company turn a profit last year alongside her predecessor Kim Sang-hyun, who is now vice chairman of Homeplus.

Lim is highly regarded for her meticulous management style. She considers communication with employees and team harmony as paramount. Lim studied business at Yonsei University and earned an MBA from the school. She has worked at tech companies like Motorola and Compaq Korea, and moved to retail in 1998, serving as chief financial officer at Costco, BuyTheWay and Australia’s Exego Group.

Homeplus also appointed Ohm Seong to the position of chief commercial officer. She started her career at GE in the United States in 1987 and is an expert in the retail sector with 30 years of global experience. Ohm previously served as senior vice president and general manager of merchandising at Walmart in the U.S. and Japan offices. At Homeplus, she will put effort into enhancing the overall competitiveness of the company’s products, developing private-brand goods and leading global sourcing.

In human resources, Choi Young-mee will serve as the top officer and head Homeplus’ initiative to increase youth employment. The company has been regularly hiring high school graduates since September 2016. Homeplus expanded recruitment to discharged army sergeants in January. It has also strengthened recruitment of underprivileged populations including the disabled people.

“Since a majority of customers in the discount retail industry are women, Homeplus can gain a lot by nominating women to significant positions as it provides the company with a competitive edge to understand customers better,” a company spokesperson said. “Homeplus is going to keep this principle, setting an example of corporate culture that appoints top executives regardless of gender.”