On the PGA Tour, distance is the new measure of a master

On the PGA Tour, distance is the new measure of a master 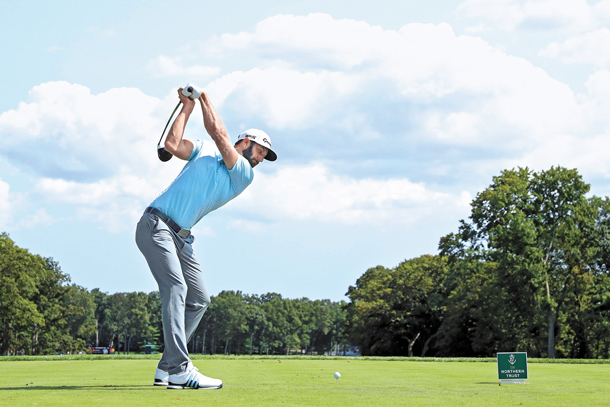 Dustin Johnson, No. 1 ranked golfer in the world, tees off during a PGA Tour event. Johnson was ranked second in driving distance last season. [JOONGANG PHOTO]

There’s an old saying in golf, “drive for show and putt for dough,” but on the PGA Tour in the 21st century, this no longer seems to be the case as long-hitters now dominate the money list. 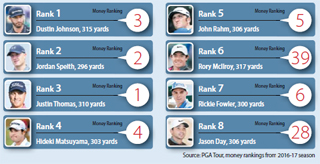 The average driving distance of the top 11 golfers in the world is 305 yards. Aside from Speith and Henrik Stenson of Sweden, nine others hit over 300 yards. Also, the overall average driving distance has gotten longer, increasing by 13 yards in the 2015-16 season compared to the 2001-2002 season. In addition, the number of players hitting their drive over 300 yards has increased. Only one player was able to hit their drive over 300 yards in the 2001-2002 season, but last season, 43 players managed that feat.

Speith won the The Open, but since the course was played shorter with a lot of runs and bunkers, distance wasn’t an important factor.

The sudden change comes from improvements in equipment and physique. Most players today have personal trainers who travel with them throughout the season. Another reason, according to Austin S. Na, Kevin Na’s brother who works as an SBS Golf commentator, is that these effects come from Tiger Woods, since young golfers on the Tour today grew up watching Woods.

“They tried to hit their ball far and built their bodies like athletes,” Na said. “While hitting far, these players have high accuracy. It’s not true that long hitters have less accuracy.”

For a while, greens in regulation percentage was considered more important than the number of putts or average driving distance. But that is no longer the case.

“Since long hitters are given wedge shots as their second, they tend to be more aggressive even when the pin is located in the corner, which leads to them having their shot land on the fringe,” Na said. “Also, to have an uphill putt, they intentionally miss the green, so they have a lower greens in regulation percentage compared to players who aim for the center of the green, but this allows them to make more birdies.”