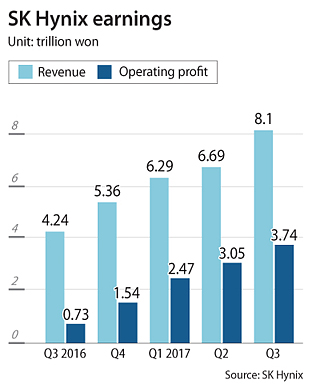 And yet the quarterly operating profit fell short of an analysts’ consensus estimate of 3.82 trillion won compiled and released by stock information provider FnGuide on Monday. Revenue came in above an estimate of 7.94 trillion won.

The chip-making arm of SK, which was acquired in 2012, cited a 17 percent increase in DRAM shipments in the quarter from the previous quarter and an increase in average selling price by 6 percent thanks to seasonal demand for mobile products as well as strong demand from the server sector.

“DRAM supply has been tight on account of the slowdown in technology migration and a conservative stance towards capital spending as DRAM suppliers aim to keep their profits high,” said market researcher TrendForce in its 2018 industry market forecast released on Thursday.

Propped up by the launch of new smartphones in the quarter ending September, NAND shipments also climbed 16 percent quarter on quarter, according to SK Hynix. But the average selling price decreased 3 percent from the previous quarter.

NAND remains a weak spot for the company. Its market share as of the second quarter was 10.6 percent, according to market researcher DRAMeXchange. Samsung was No. 1 with 38.3 percent of the market, followed by Toshiba with 16.1 percent.

SK Hynix is joining a Bain Capital-led consortium that is purchasing Toshiba’s memory unit for 2 trillion yen ($17.6 billion). SK Hynix is investing 395 billion yen. Part of the investment will come in the form of convertible bonds, which could allow the SK subsidiary to take an equity stake of up to 15 percent in the Japanese chipmaker in the near term.

The company vowed to place its focus on server and mobile products, which are expected to lead demand.

Shares of SK Hynix ended 3.67 percent down at 78,700 won on Thursday. The share price has nearly tripled over the past year.