Striking a balance with Japan

Striking a balance with Japan 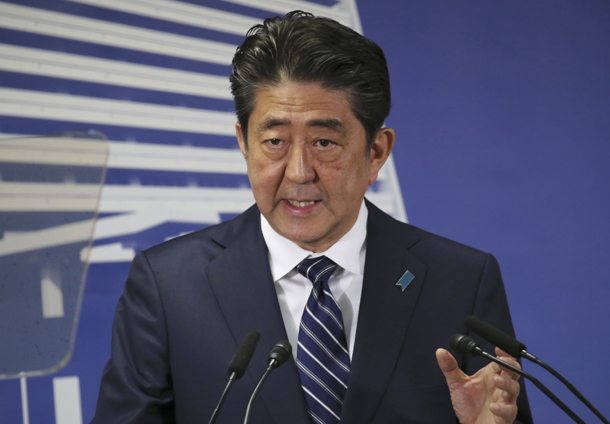 Japan’s Prime Minister Shinzo Abe speaks during a press conference at his Liberal Democratic Party headquarters in Tokyo, on Oct. 23 after his ruling coalition won a clear majority in the lower house elections. Abe pledged to tackle what he called Japan’s two national crises, the military threat from North Korea and an aging and shrinking population. [AP/YONHAP]

Korean President Moon Jae-in may not be happy about Japanese Prime Minister Shinzo Abe getting a fresh mandate after his party’s sweeping win in a snap election. Since he took office in May, Moon has met Abe four times. Two occasions were devoted to tripartite summit talks with U.S. President Donald Trump. According to sources, Abe made annoying comments in the presence of Trump. The Japanese leader criticized Seoul for being lukewarm in containing Pyongyang or cooperating with sanctions on Pyongyang by Washington and Tokyo. The comment forced Moon to explain Seoul’s two-track policy to tame the aggressions of Pyongyang. Trump would nod his head sympathetically after hearing out Moon.

To Moon, Abe played the role of agitator and not mediator. Moon nevertheless met with Abe four times and talked over the phone eight times. Next month in Vietnam, Moon will be meeting him for the fifth time on the sidelines of the Asia Pacific Economic Cooperation summit conference.

Liberal parties with the tendency to be hard-line toward Japan usually soften once they become the ruling power. Seoul cannot afford to lose Tokyo’s favor while pursuing its policy on Pyongyang. President Kim Dae-jung was on friendly terms with his Japanese counterpart, Keizo Obuchi. His liberal successor Roh Moo-hyun also got along well with Prime Minister Junichiro Koizumi. Roh was the first to suggest to Tokyo a bilateral free trade agreement.

As a presidential candidate, Moon was hawkish on Japanese issues. But he is unlikely to push ahead with his campaign promise of renegotiating the controversial pact on comfort women that was signed by the former conservative government. The issue was left out from the pending foreign agenda drawn up by the state planning advisory board that acted as Moon’s transition team. During talks with Abe, Moon did not bring up the issue and only said there were stumbling blocks that got in the way of further progress in bilateral ties. Seoul is likely to figuratively demand fundamental changes from Tokyo over the next five years, while the latter maintains it cannot revisit the comfort women agreement and other past issues.

Why has the government backed down? With Pyongyang so belligerent and so rapidly advancing its nuclear and missile programs, Seoul cannot afford to fight with Tokyo on other issues. Moreover, the current U.S. leader made it obvious that Washington places Tokyo ahead of Seoul among Asian allies for deterrence against Beijing. That suits Seoul for the time being as it cannot outright irk Beijing. So it must feign cooperation. That is why Moon agreed on including the term of stronger Korea-U.S.-Japan cooperation in a recent joint statement with Trump.

Civic groups have not responded strongly to Moon’s ambiguous policy towards Tokyo. If the same policy reversal was made by a conservative president, they would have lashed out at the government for being pro-Japan. But civil groups tend to go easier on liberal administrations. Moon and his government should make the most of this freedom. Seoul must be cool-headed and practical in policy towards Japan. For instance, it should pursue signing gradual and limited arms support pacts with Tokyo, while being mindful of not annoying Beijing. It need not and must not agree to regular military drills with Japan and the United States as Tokyo demands. Such military exercises cannot be helpful for Seoul in maintaining ties with Beijing.

Next year marks the 20th anniversary of the landmark joint declaration following a 1998 summit between Kim and Obuchi that was a turning point in bilateral ties through lifting a ban on the import of Japanese cultural products and content. Some are proposing Seoul pursue holding events earlier to improve bilateral relations. But forced cordiality won’t help. The two cannot return to 20 years ago when China was hardly a factor in the bilateral relationship. Seoul should coolly acknowledge Beijing’s rise and establish ties with Tokyo on realistic and practical terms.