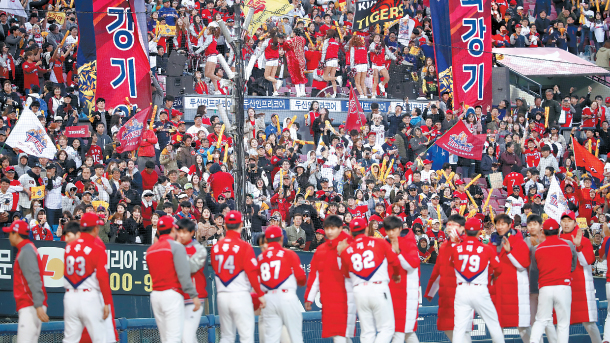 The Kia Tigers celebrate after defeating the Doosan Bears 5-1 in the fourth Korean Series game at Jamsil Baseball Stadium on Sunday. Having won three consecutive games, the Tigers are now only one win away from their 11th Korean Series title in the club’s history. [YONHAP]

The Kia Tigers beat the Doosan Bears 5-1 on Sunday to reach the cusp of their first Korea Baseball Organization (KBO) title in eight years.

Roger Bernadina had three hits and knocked in two runs, and starter Im Gi-yeong tossed five-and-two-thirds shutout innings in his postseason debut as the Tigers claimed Game 4 of the Korean Series at Jamsil Baseball Stadium in Seoul. The Tigers now lead the best-of-seven series three games to one.

Game 5, the first elimination game of the series, is back at Jamsil Stadium at 6:30 p.m. today.

The Bears, two-time defending champions, now find themselves in a hole from which only one club has ever rallied. That was the 2013 Samsung Lions who, incidentally, trailed the Bears three games to one before reeling off three straight wins for the championship.

The Tigers have won 10 championships to lead all franchises in the KBO’s 35-year history. Their last title came in 2009.

The Tigers wasted no time taking the lead in this one. With one out in the first, No. 2 hitter Kim Joo-chan lined a double to right-center off Doosan starter Yoo Hee-kwan, and Roger Bernadina brought him home with a triple down the right field line.

Choi chopped one to first baseman Oh Jae-il, but Yoo was late covering the bag, as Choi beat him to the base for the single.

The Bears had a base runner in each of the first three innings, but for the second straight day, they had trouble cashing in on those chances.

They wasted a two-out double by Park Kun-woo in the first. In the second, Choi Joo-hwan hit a single with one out, but was stranded there when the next two batters made quick outs.

The Bears hit back-to-back singles after one out in the third, but Im struck out Park Kun-woo and got Kim Jae-hwan to ground out to second to escape the jam unscathed.

The Bears stranded another base runner in the fifth, when Nick Evans led off with a single and never came home.

They had another scoring opportunity in the sixth but came up empty.

Oh Jae-il slapped a two-out single and reached second when right-fielder Lee Myung-ki misplayed the ball by letting it bounce past him. The hit chased Im from the game, and the new pitcher, Sim Dong-sub, promptly walked Choi Joo-hwan to bring the go-ahead run to the plate in the form of Yang Eui-ji.

But Yang, hitless so far in the Korean Series, flied out to right against new pitcher Kim Yun-dong to kill the rally.

The Tigers gave themselves more breathing room with two runs in the top seventh. With men at first and second with two outs, Kim Joo-chan hit a roller right at shortstop Kim Jae-ho for what looked to be an inning-ending play. But the grounder took a funny hop and bounced off the usually sure-handed veteran, and pinch-runner Ko Jang-hyeok scored from second as the ball skipped into shallow center.

Bernadina then followed up with a clean single to left, his third hit of the game, to make it 4-0 Tigers.

Facing the Tigers’ bullpen, the Bears were still unable to score in the seventh. They had two men on after two walks, but Oh Jae-won lined out to right field and Park Kun-woo struck out for the second time to end another fruitless inning.

Evans’ two-out single in the bottom of the eighth scored the Bears’ lone run in this game. With men still at first and second after the hit, pinch hitter Jung Jin-ho, representing the tying run, flied out to deep left.

And the Tigers went up by four again in the top of the ninth on Kim Joo-chan’s fielder’s choice, and closer Kim Se-hyun made the score stand by notching his second-straight four-out save.