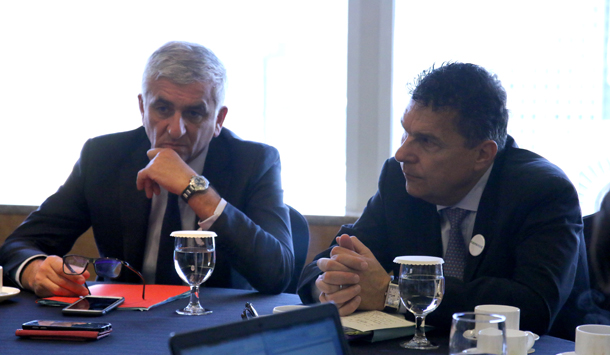 Herve Morin, president of the French region of Normandy, left, and Luc Lesenecal, chief executive of apparel brand Saint James, answer reporters’ questions after a networking event on Monday at the Lotte Hotel in Seoul. [FRENCH KOREAN CHAMBER OF COMMERCE AND INDUSTRY]

A business delegation from the French region of Normandy met with Korean executives on Monday to seek investors and business partners.

Korea was the third country after Iran and Russia, and the first stop in East Asia, on the delegation’s world tour to promote business opportunities in Normandy.

“Korea is a country that traditionally had many exchanges with France,” Herve Morin, president of Normandy and a former French minister of defense, said during an interview after a networking event at the Lotte Hotel in Seoul.

Morin noted that Koreans were “very close to Latin Europeans” in nature, citing the country’s large Christian population and willingness to communicate as reasons why French companies find an easy time doing business in Korea.

The Normandy delegation included representatives from 10 small and medium-sized enterprises in industries ranging from agriculture to medical software. Among them, seven have the label of Entreprise du Patrimoine Vivant, granted by the French government in recognition of their long legacy and manufacturing skill.

Among notable companies on the list was Saint James, an apparel maker most famous for its striped knit wear. The brand entered the Korean market seven years ago after gaining a name among local fashion enthusiasts.

“What we notice about Korean consumers is that they are exigent when it comes to product quality and also origin - on where the products are manufactured and where the brand is from,” said Luc Lesenecal, chief executive of Saint James.