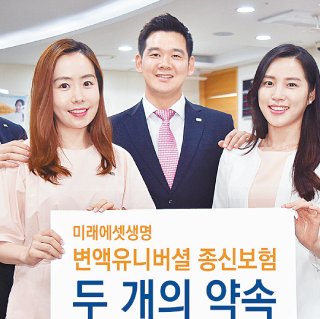 Mirae Asset Life Insurance recently launched its “Variable Universal Whole Life Insurance, Two Promises” product offering benefits for policyholders in living and in death. Backed by the firm’s unique expertise in variable life insurance, the funds, including a new exchange-traded fund, are providing the highest rates of return in the industry.

“Variable Universal Whole Life Insurance, Two Promises” not only guarantees money in cases of death but also assures policyholders money to cover living costs while they’re still alive. Once they designate the period when they want to start receiving payments, the money is automatically provided for 20 years starting from that time.

For the coming year, Mirae Asset is determined to bring its PCA Life Insurance acquisition to a successful close and achieve quality growth for the satisfaction of customers and employees. The firm will step up efforts to ensure the secure retirement of its clients through ceaseless innovation and substantial management as retirement planning specialists.

“‘Variable Universal Whole Life Insurance, Two Promises’ guarantees death and living benefits,” said Oh Eun-sang, chief of product development at Mirae Asset Life Insurance. “This will provide customers with the premium return rate and investment experience for customers who are concerned about both guarantees and assets after retirement.”