[Sponsored Report] Dankook writes a new chapter in its history

[Sponsored Report] Dankook writes a new chapter in its history

Dankook University was founded on Nov. 3, 1947, as the first university established after Korea’s independence from Japan. Founders “Beomjeong” Chang Hyong and “Hyedang” Cho Huijae recognized the significance of educating talented and patriotic individuals and established Dankook to “educate patriotic experts who contribute to mankind.” Chang believed that “we, the eternal owners of this nation, have the responsibility to make our country flourish.”

A school that challenges and innovates

When Dankook University relocated from Seoul to Jukjeon in 2007, the move was considered innovative. Its Seoul campus in Hannam-dong was about 135,700 square meters (34 acres), and the physical limitations hampered development.

Dankook concluded the best decision was to move to a new base further south in Jukjeon, where the university could continue to grow for the future. The Jukjeon campus in Yongin, Gyeonggi, is roughly 505,300 square meters, about 3.7 times bigger than the Seoul campus.

After the relocation, Dankook improved its research and education environment by constructing three new buildings housing the college of engineering, laboratories, a media center and lecture halls. In 2007, while the university was still adapting to its new campus, the faculty published 361 papers. Last year, the number jumped to 652.

A dormitory building that can house up to 2,400 students has alleviated the burden of living expenses for students. A new International Hall has contributed to making Jukjeon a global campus, allowing 1,000 exchange students to form their own community within the campus. At Dankook’s Global Industry-University Cooperation Hall, numerous start-ups are pursuing their dream of becoming the next Google or Apple.

Along with physical infrastructure, the school has also improved its technological infrastructure. It was the first university in Korea to adopt a course assessment system for students’ majors that enhances quality of education by promoting internal competition and offering incentives.

In 2014, Dankook enacted special policies for information technology and cultural education, with the aim of nurturing talented students who can utilize big data and design thinking and lead the fourth industrial revolution. With its advantageous location near the Pangyo Techno Valley, Dankook has become a cradle for start-up ventures.

“With recent success in government projects like ‘Intellectual Property Education Project’ and ‘Cultivation Project for Startup-Leading Universities,’ the Jukjeon campus is taking a new leap forward to become the center for industry-university cooperation and business start-up programming,” the university said.

Left: To prepare for the fourth industrial revolution, Dankook University is concentrating on design thinking. Right: Dankook University held its third Start-up Demo Day in December 2016. The school was selected by the government to receive financial assistance under its Cultivation Project for Startup-Leading Universities. [DANKOOK UNIVERSITY]

When Dankook University established its first suburban campus in Cheonan, South Chungcheong, in 1978, it was a significant moment in the history of Korean higher education. Dankook’s move was the first attempt to spread higher education to provinces outside Seoul with a branch campus.

At that time, Chang Choong-sik, president of Dankook University, faced a lot of opposition to setting up a campus and hospital in Cheonan, which had a reputation as a wasteland. But Chang pushed through with the move on the basis that national prosperity should be driven by education.


The Cheonan campus started with five majors: business administration, agriculture, electronic engineering, architectural engineering and civil engineering. There were 350 students at the time of its founding. Now, the campus has 12 colleges, 49 majors, and enrolled students are about 1,500.

In 2008, Chang Ho-sung took office as president of the university, and after his inauguration, Dankook made significant strides toward enhancing its research and education to compete with globally-renowned schools. Dankook has been given several awards from the government and media, including accolades like “SW Convergence College” in 2017; one of six “BK21 PLUS” project universities from 2013 to 2020; a leading university for job creation from 2014 to 2017; and one of the country’s top two schools for job search and enterprises in Hankyung’s “2016 Engineering School Assessment.”

Dankook currently has the highest number of lectures in the country on coding, approximately 320, and about 30 start-up clubs that have received up to 5 million won ($4,460) from the university in financial assistance. 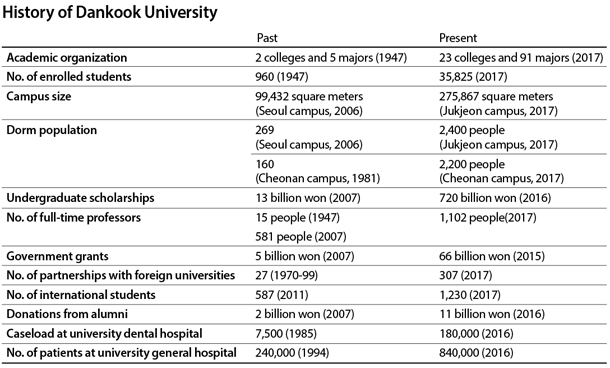 A university of the future

Dankook University is a pioneer in the pedagogical application of artificial intelligence. The university has created an academic program to produce talented individuals who can engage in creative and integrated thinking and pursue self-directed learning.

The university established an Innovation Center for Future Education and EduAI Center to explore the construction of a smart campus. Last June, Dankook selected SK Telecom to build its AI campus. SK Telecom, Korea’s largest telecommunications company, has distinguished itself in the AI market with its voice assistant Nugu.

With AI services at Dankook, students will be able to get answers to questions 24 hours a day, access the school’s administrative system from any device and receive customized academic consultations to help lighten the workload of professors and staff who normally consult with students.

The AI campus is scheduled for completion by 2021.

“The main goal of adopting AI on campus is to make an environment in which students can design their own future,” said Chang Ho-sung, president of Dankook University. “The previous university education could be thought of as a provider-centered system that conveys an already-existing framework.

“But with the introduction of AI, it will be transformed into a consumer-centered system,” he said, “where students utilize the information provided by the university and learn from big data on their own.”

Along with these innovations, Dankook University is implementing an administrative system called “Young Ung Story,” where students will be able to manage their schedules, check lectures they’ve attended, track activities inside and outside the university and see the certificates they’ve acquired. The system encourages the development of active, innovative and devoted individuals with the balanced capabilities of self-direction, communication, problem-solving, cooperation and devotion to global citizens. “Young Ung Story” will help Dankook students systematically manage their time and become “young ung,” or heroes, of the future.

Fostering talented individuals using big data and design thinking is Dankook’s preparation for the fourth industrial revolution. Design thinking challenges students’ preconceived notions about the world and encourages them to come up with novel solutions to complicated problems, often through group work.