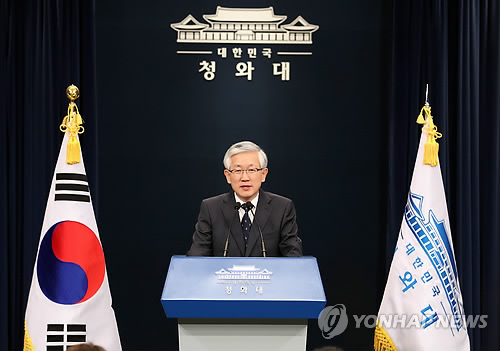 South Korea and China have agreed to put their bilateral relations back on the right track, apparently normalizing ties that have been soured over the deployment of a U.S. missile defense system in South Korea, the foreign ministry said Tuesday.

They reiterated their long-held stance on issues related to the Terminal High Altitude Area Defense (Thaad) system deployed in South Korea but agreed to continue to discuss ways to resolve the differences going forward.

"The two sides attached great importance to the Korea-China relationship and decided to push for the further development of the strategic cooperative partnership," the foreign ministry said in a press release.

The agreement came after South Korea and China saw their ties frayed over the Thaad controversy.

Since Seoul announced the deployment of the U.S. missile defense system on its soil in July last year, China has demanded the reversal of the decision suspecting it is part of the U.S.-led MD and claims it would hurt its strategic security interest.

In apparent protest, Beijing has taken what appear to be retaliatory steps against South Korean companies and products in various areas.

The two were apparently unable to completely resolve the prolonged dispute over the Thaad U.S. missile defense system deployed here, but said they will continue to find a solution through dialogue.

"The Korean side took note of China's position and concern regarding the Thaad issue, and made it clear that the Thaad system deployed in Korea is, pursuant to the original purpose of its deployment, not directed at a third country," the ministry said.

"The Chinese side reiterated that it opposes the deployment... At the same time, The Chinese side took note of the position stated by the Korean side," it added. "The two agreed to engage in communication on Thaad -related issues."

"The two sides reaffirmed the principles of realizing the denuclearization of the Korean Peninsula and peacefully resolving the North Korean issue, and reiterated that they would continuously promote the resolution of the North Korean nuclear issue through all diplomatic measures," it said.

"To this end, both sides agreed to further enhance strategic communication and cooperation."

South Korean President Moon Jae-in and Chinese President Xi Jinping will hold a bilateral summit next week, the first step toward normalizing the countries' relations that have long soured over the deployment of a U.S. missile defense system in South Korea, an official from South Korea's presidential office Blue House said Tuesday.

The Moon-Xi summit, the second of its kind, will be held on the sidelines of the Asia-Pacific Economic Cooperation forum that will be held in Da Nang, Vietnam, next Tuesday through Wednesday, according to Nam Gwan-pyo, a director of the presidential National Security Office.

The announcement came shortly after the countries released a joint press release, vowing to put their ties back on the right track.

The upcoming summit, Nam said, "can be said to be the first step in implementing the agreement to quickly put exchanges between the two countries in all areas on the right track."

Seoul and Beijing have been at odds since the new Moon Jae-in administration decided to fully deploy the Thaad U.S. missile defense system following a series of North Korean missile tests.

Moon and Xi first met in Berlin in July, before their participation in the Group of 20 summit in Hamburg, Germany.

Nam said the South Korean president may also hold bilateral talks with Chinese Prime Minister Li Keqiang on the sidelines of a regional forum hosted by the Association of Southeast Asian Nations slated to be held in Manila from Nov. 12-14.