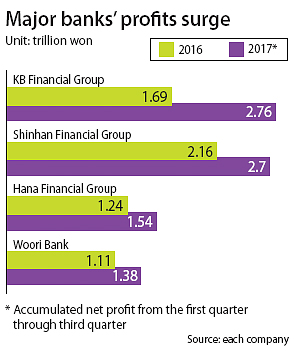 Major commercial banks overshot earnings forecasts in the third quarter on the back of robust interest income.

Heather Kang, an analyst at Mirae Asset Daewoo Securities, said that margins from lending acted as the main driver of growth.

She noted that won-based loans increased 2.7 percent compared to the previous quarter, which led to the increase in net interest income.

Analysts said that the unit’s acquisition of full ownership in KB Insurance and KB Capital also contributed to the record-high earnings.

Won Jae-woong, an analyst at NH Securities & Investment, cited the growing volume of loans to small businesses as the key driver for Shinhan’s profit growth.

“The reason for the rise is the expansion of loans to small businesses. Won-denominated loans jumped 3.2 percent compared to the previous quarter, and those for operators of small businesses grew 4.6 percent.”

Shinhan Financial Group registered 892 billion won in net profit, up 30.5 percent from a year ago. Its quarterly performance was better than expected from analysts’ viewpoint.

Net profit at the group came to 510 billion won, up 13.32 percent from last year. The growth reading is 3 percentage points below the market consensus.