Cha Bum-kun believes Korea should benchmark Germany to develop the sport in a healthy way. 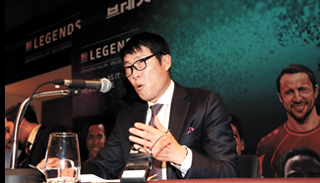 Cha, arguably the country’s best footballer in history, said during a press conference on Thursday that the Korean men’s football team can overcome its current crisis by learning from Germany, the defending FIFA World Cup champions and current No. 1 in the world.

Korea managed to qualify for next year’s World Cup in Russia, but fans have been up in arms over the team’s performance in recent matches. Since Shin Tae-yong was appointed head coach in July, the team has yet to collect a win. In 2017, the Taeguk Warriors have only won once.

Cha is one of 10 international Bundesliga legends designated by the German football league. The 64-year-old, who hung up his boots in 1989, is the greatest Asian-born scorer in Bundesliga history with 98 goals in 308 matches.

The football legend said Korea and Germany have similar characteristics.

“Koreans don’t give up easily and have the strength to fight until the end,” he said. “These are good things in football and helped us become one of the top teams in Asia. They are also similar to Germans’ fighting spirit, and that’s why I believe German football is suitable for us.”

Cha said Korea should learn from what Germany went through after the 2000 UEFA European Football Championship. Germany suffered a group-stage exit at Euro 2000, with one draw and two losses.

“Germans were devastated like us in 2000, but now they’re the world champions,” he said. “Germany has since focused on developing youth players and raising young coaches to help them. We have to benchmark what Germans did after Euro 2000.”

Cha said he would talk with youth football coaches across the nation and ask for help from the Korea Football Association and German league.

“We see a decreasing number of youth footballers and coaches, and this is a significant problem,” he said. “Germans have an educational approach and system. Like the Germans transformed themselves after 2000, it’s time for us to also make a change.”

Cha, who also coached the Korean men’s team during the 1998 World Cup, urged Korea to forget about their past glory with Guss Hiddink, who led the team to the 2002 World Cup semifinals.

“How long do we have to bring in foreign coaches and talk about Hiddink?” he said. “We have to give an opportunity to promising coaches and start raising young coaches. When I see [German national team head coach] Joachim Low, I always think that we have to beef up our programs for coaches.”

With a sustainable system for youth footballers in Korea, Cha said he wants to see a player who can achieve more things than he and Son Heung-min did in the Bundesliga. Son scored 41 goals in 135 matches in the German league before moving to Tottenham Hotspur in the English Premier League in 2015.

“I felt a little bit sad when Son left Germany because I thought he would lift the [German league trophy], which I never won,” he said. “I hope one day a Korean player can win the trophy.”

Cha said his best career decision was going to the Bundesliga.

“I had nothing else to lose back then and maybe that’s why I decided to take the challenge,” he said. “The Bundesliga gave me lots of things, and it still feels like a hometown.”

Cha will meet with Bundesliga fans on Saturday at Seoul World Cup Stadium, where they will watch a match between FC Augsburg and Bayer Leverksuen.