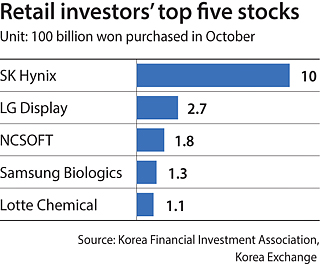 While Seoul’s main bourse broke closing records day after day, retail investors on the sidelines started to jump in.

According to Korea Exchange, retail investors last month net purchased 610 billion won ($547 million) worth of stocks. It was the first time in three months that retail investors were net buyers since June, when they net bought 1.58 trillion won in stocks.

The recent turnaround is a positive sign for the market, considering retail investors usually follow the lead of foreign and institutional investors.

“The growing preference for riskier assets has gotten noticeably stronger as companies’ third-quarter performance reports have been positive while both external and internal economic indicators turned out better than expected,” said Jeong Dai, an analyst at Meritz Securities. “Usually the investment sentiment of retail investors improves after the stock index rise to a certain point. But this time retailers didn’t wait until the stock index rose as the positive momentum in the market improved investment sentiment.”

Retail investors have been particularly keen on IT stocks. They net bought 1 trillion won of SK Hynix shares. LG Display and NCSOFT were the second and third most popular stocks among retail investors. Samsung Electronics and the country’s largest mobile messenger company Kakao were among the top 10 companies favored by retail investors last month.

Analysts expect retail investors’ interest in the secondary Kosdaq market to grow too.

In 2005, which was the middle of the Roh Moo-hyun administration, and in 2009, the second year of the Lee Myung-bak administration, the Kosdaq saw surges of 84 percent and 55 percent.

In 2015, the third year of the Park Geun-hye administration, the Kosdaq rose 26 percent.

However, there are also concerns about retail investors as many borrow to play the markets.

The biggest borrowers of such loans are retail investors.

Loans for stocks traded on the Kosdaq rose 16 percent so far this year. During the same period loans for shares on the Kospi surged 48 percent - following the surge in the Kospi itself.

The problem is that when hares fall below a certain level, investors who have borrowed from brokers have to pay additional guarantees. If they can’t, the brokerage can force the sale of the stocks.

Additionally, such loans are short-term with high interest rates.

The rate for the first week is 4 percent on an annualized basis. For longer terms, interest rates goes up to a maximum of 11 percent.

Still, market experts say retail investors would be wise to concentrate on IT shares, as they are expected to perform well until the first half of next year.