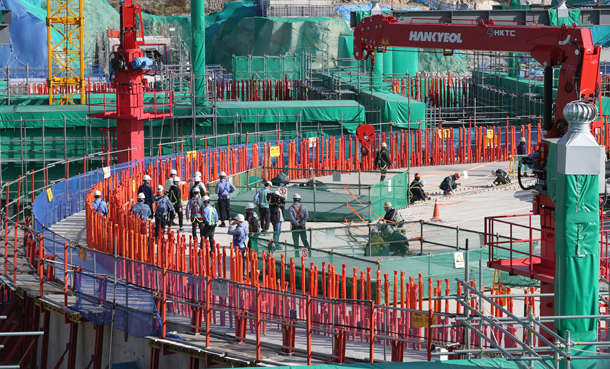 “The topic of discussion for the civilian group was whether to resume the construction of Shin Kori 5 and 6. Reduction of nuclear power generation is not something that can be included in the recommendation at the same level as the construction resumption. Reducing, maintaining or expanding the nuclear power plants was one of the many survey questions,” said former Seowon University president Song Ho-yeol, who participated in the panel of members of the public that weighed in on the future of the power plants.

On October 20, the panel recommended a reduction of nuclear power plants along with continuing the construction of the Shin Kori 5 and 6 reactors. In the fourth survey of 471 participants, 53.2 percent wanted a reduction, 35.5 percent wanted to maintain the current level and 9.7 percent chose expansion.

Song said, “Some insisted that the committee should discuss a nuclear phaseout as well as construction of Shin Kori 5 and 6, but the panel repeatedly advised that the topic should be the Shin Kori 5 and 6. The discussion has been videotaped and recorded.”

The reduction of nuclear power plants that the panel recommended leads to various interpretations of when they should be reduced and whether to reduce the numbers or lower the portion of power generation.

In 2012, Japan’s survey of public opinion proposed specific numbers such as zero nuclear power plants, 15 percent or 20-25 percent. If the panel wished to make a recommendation, the survey should have been designed more helpfully.

While some think nuclear power reduction hasn’t been fully discussed, the government is pursuing a nuclear phaseout. Plans to build six additional nuclear reactors were scrapped.

However, the reduction of nuclear power generation is not directly connected to a nuclear phaseout. If new nuclear reactors are not constructed, the ecosystem of the nuclear energy industry could collapse, just as organisms that don’t reproduce are bound to go extinct.

The Cheonji 1 and 2 have been cancelled during the process to purchase the site, and they were supposed to have a new APR+ reactor. It has a bigger capacity and is safer than systems used in existing plants.

At the National Assembly inspection of government agencies on October 31, Bareun Party lawmaker Chung Un-cheon said that it was not desirable to bury the next-generation technology like APR+ that cost 235.7 billion won to develop. Minister of Industry, Commerce and Energy Paik Un-gyu said that the government was actively promoting exports of APR1400 and APR+ to support the nuclear energy industry and technologies.

However, it is hard to understand how APR+ can be exported when it is not used in Korea. It is hard to accurately predict the energy supply in the future. As the nuclear power plants are reduced in the long term, the domestic nuclear energy industry should be able to maintain a certain capacity.