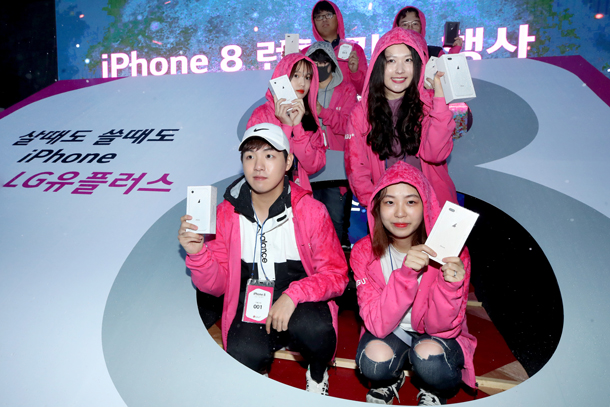 Customers hold up Apple’s iPhone 8, which they received from LG U+ at the telecommunication company’s store in Gangnam, southern Seoul, on Friday. U.S. tech giant Apple started sales of the new iPhone 8 in Korea on Friday, with the devices receiving a relatively tepid response from local users, industry watchers said. According to sources, preorders for the iPhone 8 were only 60-70 percent of the iPhone 7 series in Korea. Industry watchers said the sluggish sales of the iPhone 8 came as some Apple users in Korea are waiting for the iPhone X. The U.S. company has not yet decided on the release date of the iPhone X for Korea. The iPhone 8, which maintained most of the design of its predecessor, comes with a price tag of 946,000 won ($851) for a 64 GB edition. The 64 GB iPhone 8 Plus is released at 1.07 million won.

SK Telecom, the largest mobile carrier, said 55 percent of its preorder customers for the iPhone 8 series were in their 20s. [YONHAP]