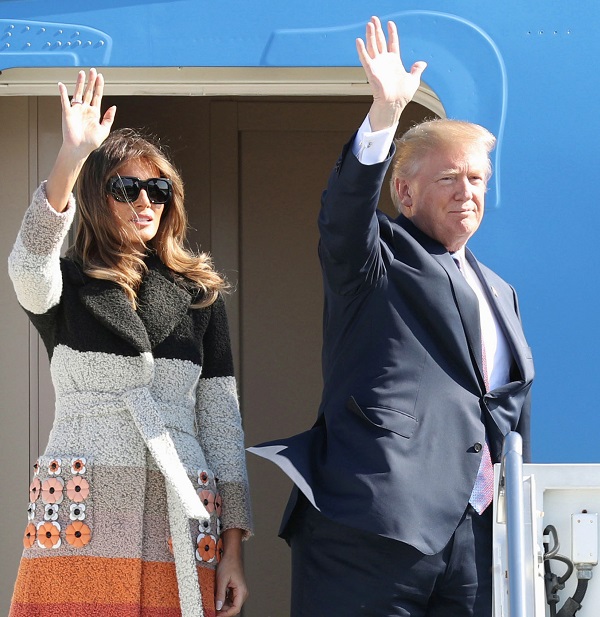 U.S. President Donald Trump, right, and first lady Melania Trump, left, wave on their arrival at the U.S. Yokota Air Base on the outskirts of Tokyo Sunday. President Trump arrived in Japan on a five-nation trip to Asia, his second extended foreign trip since taking office and his first to Asia. [YONHAP]

“No one — no dictator, no regime and no nation — should underestimate, ever, American resolve,” Trump said as he addressed U.S. and Japanese troops at Yokota Air Base shortly after his arrival in Japan. “You are the greatest threat to tyrants and dictators who seek to prey on the innocent.”

Japan is the first destination on Trump’s five-nation trip, the longest Asian tour by any U.S. leader since 1992. Discussions on trade and Pyongyang’s nuclear and missile programs are expected to dominate the trip, and a warning to the North was the centerpiece of his first message in Asia. He wore a military bomber jacket to address the cheering soldiers.

“Every once in a while, in the past, they underestimated us. It was not pleasant for them, was it?” Trump said, referring obliquely to North Korean ruler Kim Jong-un and his regime. “We will never yield, never waver and never falter in defense of our freedom,” he said.

According to media, Trump also told reporters earlier on Air Force One that Washington will soon make a decision on whether to add North Korea to a list of state sponsors of terrorism. The North was on the list for 10 years until it was removed in 2008 after it agreed to a nuclear inspection. The North later abandoned the promise.

“It’s a big problem for our country and for the world,” Trump told reporters about North Korea, saying “there’s been 25 years of total weakness” in dealing with the country. He said his administration planned to take a different approach, but did not give any further details.

“I think it’s expected we’ll meet with Putin,” Trump said en route to Japan. “We want Putin’s help on North Korea, and we’ll be meeting with a lot of different leaders.”

North Korea’s intercontinental ballistic missile firings and its sixth and largest nuclear test have posed a critical challenge to Trump’s presidency. Tensions in the region remain high as South Korea and the United States conduct drills, which include so-called strategic assets deployed by the U.S. in the region as a show of force to North Korea.

Trump differentiated the North Korean leadership from the citizens of the reclusive state. “They’re industrious, they’re warm, much warmer than the world really knows and understands,” he told reporters on the plane. “They’re great people and I hope it all works out for everybody. And it would be a wonderful thing if it could work for those great people, and for everybody.”

Before leaving for Japan, Trump also mentioned Abe’s campaign for a military buildup in connection with the need for China to use its influence over the Kim regime. “Japan is a warrior nation,” he said in an interview with Fox News. “I tell China and I tell everyone else that listens, I mean, you’re going to have yourself a big problem with Japan pretty soon if you allow this to continue with North Korea”
Japan’s Asian neighbors have been wary of Abe’s plan and any kind of remilitarization of the nation.

Korean President Moon expressed his skepticism about a militarily stronger Japan in an interview with Channel News Asia on Friday. He said trilateral cooperation among Seoul, Washington and Tokyo is important to resolve the North Korean crisis, but he does not believe in a military alliance with Japan.

According to a senior Blue House official, Moon had already told Trump and Abe about his belief during their trilateral summit. “The United States is our ally, but not Japan,” Moon was quoted as saying during their luncheon on the sidelines of UN General Assembly in September.

A golf date with Abe and other political, diplomatic and cultural events are planned for Trump’s stay in Japan. He will arrive in South Korea on Tuesday, visit the U.S. Forces Korea’s Camp Humphreys and have a summit with Moon. A speech at the National Assembly is also planned for Wednesday. China, Vietnam and the Philippines are his next destinations.