Digging through data to find humanity : Exhibit explores future people can create with access to information

Digging through data to find humanity : Exhibit explores future people can create with access to information

In an age where people have an incomprehensible amount of data available at their fingertips, it is an overwhelming task to figure out where to start when thinking about how to use it best in future. As many attempt to use this information to better society, it’s difficult to discern where society is heading, or whether the future that awaits us is a utopia, or a dismal dystopia.

“Neotopia: Data and Humanity,” now open at Art Center Nabi in central Seoul until Jan. 31, 2018, asks how people can work with innovation, and highlights the work of artists who each have expressed their own ideas on how technology and data can be used to bring out the best in humanity.

At the exhibition’s opening night seminar, Art Center Nabi director Roh Soh-yeong sat with Fujihata Masaki, one of the artists featured in the exhibition, to talk about the future of data and technology. “Looking at this picture, I think everyone has felt like this once,” said Roh, pointing to a photograph of a person sitting on his own at a bench. “That’s where the whole thing started. I wondered, technology has been around us from the invention of fire to data - why not solve humanity’s most fundamental problem, loneliness?”

Taking place across four locations in central Seoul - Art Center Nabi, Tazak Madang, Nabi Future Studies and COMO - the exhibition features a total of 35 works that shed light on the different aspects of data, made by 80 artists from 13 different countries.

The 11 works on display at Art Center Nabi includes Fujihata’s “Voices of Aliveness,” a 3-dimensional map made with GPS technology combined with video recordings of different places, to “make a collective memory in a digital format,” according to the artist. The audience watches the screen as it navigates through a landscape created using animation, and in different spots, videos featuring people reacting are shown. 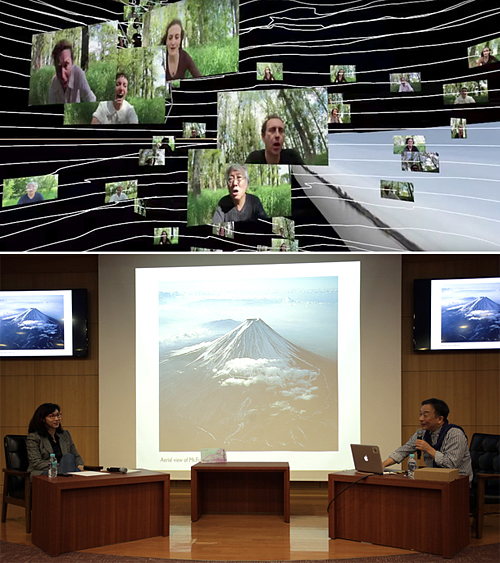 Above, a scene from Fujihata’s “Voices of Aliveness.” Below, at the exhibit’s opening night event on Nov. 1, director of Art Center Nabi Roh Soh-yeong, left, sits with Fujihata Masaki, one of the artists on display, to talk about the next future of utilizing data and technology. [ART CENTER NABI]

Another work inside the gallery is “Data Pump Jack,” which resembles a worn-out gas pump. Based on the 1973 oil crisis, the artists - Kim Jung-hwan, Yu Yu-mi, Ahn Joon-woo and Seo Won-tae - raise awareness of a possible data crisis, in which data becomes a commodity like oil and people can only get their hands on a certain amount of data according to certain criteria. When visitors hold the pump, “Data Pump Jack” asks questions and measures their grades “based on a Korean wedding consulting agency’s system,” said Kim.

“Chains” by media artists Manabe Daito, Ishii 2bit, Tsukamoto Hirofumi and Tomoto Yusuke, is an installation that visualizes the digital blockchain (a record of online transaction data) and automated trading systems, like bitcoin.

Other impressive works in the exhibition include “Data Selfie” by Hang Do Thi Duc, “Proximity Cinema” and “Body Code” by Tiffany Trenda, “Making Art - for Stock Market” by Nabi E.I.Lab and Team VOID.

“We will be able to take a step closer to true humanity by increasing an understanding of data, communicating what is valuable data for the future, and creating and sharing fruitful, unbiased data in a community-based way,” said Choi Doo-eun, chief curator of the exhibition.

Art Center Nabi is on the fourth floor of the SK building, which is located near exit 6 of Jonggak station, line no. 1. The exhibit is open weekdays from 10 a.m. to 6 p.m. Admission is free. For more information, visit www.nabi.or.kr