Trump talks tough while in Japan

Trump talks tough while in Japan 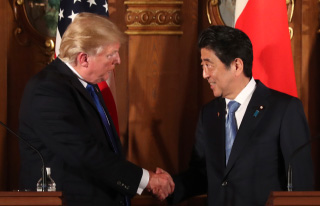 U.S. President Donald Trump reaffirmed that the “era of strategic patience” with North Korea was over during a joint press conference with Japanese Prime Minister Shinzo Abe in Tokyo on Monday, taking a hawkish tone against the regime during his first leg of a five-nation Asia tour.

“Some say my rhetoric is very strong, but look at what’s happened with very weak rhetoric over the last 25 years,” said Trump. “Look where we are now.”

Calling North Korea a “dangerous regime,” the White House chief added that the country was a “threat” to the world because it is developing unlawful weapons, carrying out nuclear tests and flying missiles over Japan.

Abe said he and Trump agreed that now is not the time for dialogue with North Korea and that the world needs to put “maximum pressure” on the regime instead, in order for it to seek policy change.

“For more than 20 years, the international community attempted dialogue with North Korea,” Abe said through an interpreter, mentioning the 1994 Agreed Framework in Geneva and the 2006 six-party talks. “North Korea committed to abandoning their nuclear program, but each time the promise was broken.” Abe said the North was buying time for missile development, stressing there was no point in talking with the North just for the sake of dialogue.

Trump spent much of the press conference discussing Japanese abductees in the North, highlighting his visit with the family members of Yaeko Taguchi, who at age 22, was kidnapped by North Korean agents in 1978.

“We stand in solidarity with Japan against the North Korean menace,” Trump said.

When asked by a Japanese reporter about the possibility of American soldiers taking military action in order to rescue the abductees, Trump responded, “We’ll see what happens with the ultimate conclusion.”

He added, “We’ll work together now that the spotlight is on. Perhaps the regime would send them back,” and that it would be a “tremendous signal” if North Korean leader Kim Jong-un did so, as well as the “start of something very special.”

Trump also said Japan was about to purchase “massive amounts of military equipment from the United States, as it should.”