PyeongChang legacy may be huge piles of debt

PyeongChang legacy may be huge piles of debt 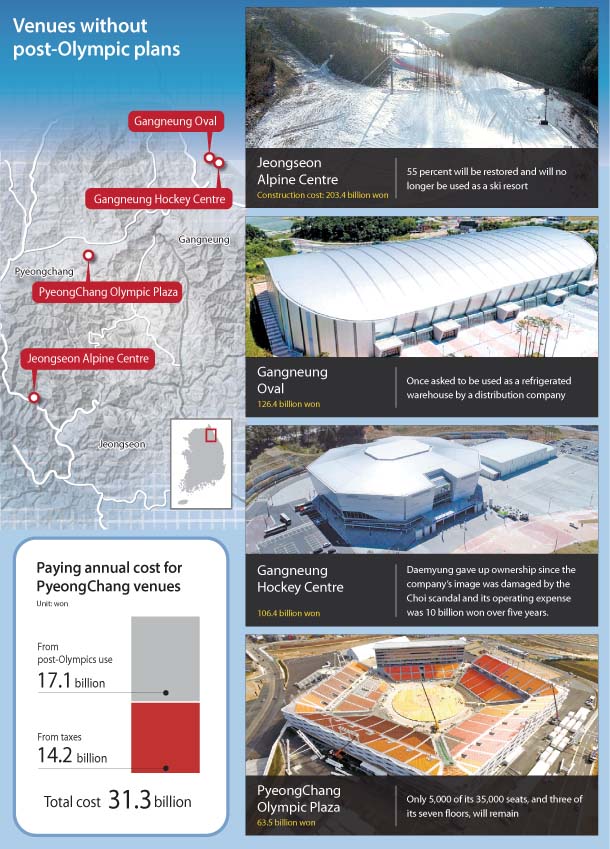 As the 2018 PyeongChang Winter Olympics rapidly approach, experts are increasingly voicing concerns that the legacy of the games may not be the passion and unity that the organizing committees are promising, but instead the costly, unused facilities that arelikely to dot the northeast of the country.

Four Olympic venues are yet to come up with post-Olympic plans, raising concerns that the Winter Olympics will join a growing list of international events that have ultimately gone on to cost Korea huge amounts of money.

Not only that, the Korean Grand Prix, hosted for the first time in 2010, had to stop in 2013 as the accumulated deficit stacked up to 190 billion won.

Excluding the PyeongChang Olympic Stadium, where the opening and closing ceremony will be held, there are a total of 12 venues for the Olympics. Of those, six of them are newly constructed and the remaining six were repaired, with the total bill racking up to about a trillion won. Including the newly-built Jeongseon Alpine Centre, which cost 203.4 billion won, Gangneung Ice Arena, costing 134 billion won, and Gangneung Oval, costing 126.4 billion won, five of the venues cost more than 100 billion won each.

But three venues - Jeongseon Alpine Centre, Gangneung Hockey Centre and Gangneung Oval - are yet to announce a post-Olympics plan. Originally, the Gangneung Oval was expected to be broken down after the Olympics, but last year, Gangwon and the organizing committee agreed to maintain the facility.

Daemyung Group, owner of the Daemyung Killer Whales Ice Hockey team, was originally going to take charge of the Gangneung Hockey Centre, but the company dropped out once it was revealed that the facility had a five-year operating cost of 10 billion won.

At the Jeongseon Alpine Centre, 55 percent of the facility is expected to be restored back to its natural state. Since it’ll no longer be able to be used as a ski resort, it’s more difficult to come up with a post-Olympics plan.

According to the Korea Industrial Strategy Institute Foundation, the annual maintenance cost of the main venues is expected to be 31.3 billion won. The foundation projects the facilities will be able to earn about 17.1 billion won a year, leaving a 14.2 billion won deficit.

The PyeongChang Olympic Stadium is going to be the biggest problem. It cost a total of 63.5 billion won to build the stadium but it will be broken down after only four days of use throughout the Olympics and the Paralympics next year. This means that the stadium cost 15.8 billion won per day.

Upon completion of the event, only 5,000 seats of 35,000 seats and three of seven floors will be kept. Though there hasn’t been a set plan for post-Olympic usage, the stadium is expected to be transformed into a concert hall or memorial park.

Since Gangwon hasn’t come up with post-Olympics plans, they are asking the central government to manage the venues. To do so, they are pushing for a revision in the National Sports Promotion Act.

“There’s a high possibility that the government will once again have to deal with the negative effects from the local government hosting such a big event,” said Lee Dae-taek, professor of physical education at Kookmin University. “Gangwon needs to be more responsible.”

Chung Hee-joon, a sports sociology professor at Dong-A University, also pointed out that, “Hoenggye, where the Olympic Plaza is located, is a small town with only a population of 4,000. It’s difficult to make a post-Olympics plan.”

To fix this, the organizing committee may have to study the success of low cost and high-efficiency events like the Gwangju Universiade and 6th CISM World Games Military Games, Korea.

The 2015 Summer Universiade in Gwangju was by far the most successful event in Korea financially, as they only constructed three of the 69 facilities and used existing venues for the remaining events.

The podiums were provided by the Incheon Asian Games organizing committee at no cost and the seats at the stadiums were folding chairs. Rather than flower bouquets, winners were awarded the event’s mascot dolls and tents were used as waiting rooms for players.

This allowed savings of 199.9 billion won in operating and equipment expenses.

The 6th CISM World Games Military Games in Mungyeong installed 350 caravans as athletes’ accommodation. Throughout the tournament, the total budget was 165.3 billion won with equipment expenses of 18.7 billion won.