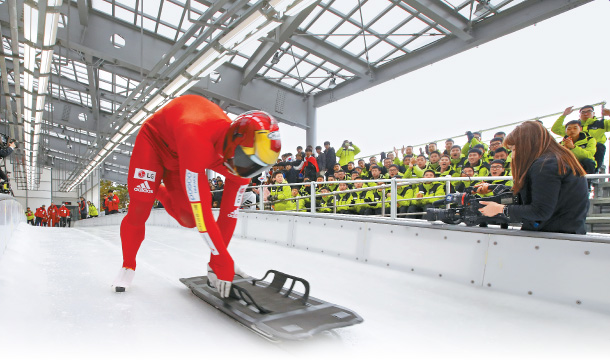 Bobsled and skeleton once the winter sports that received the least amount of attention from Korean sports fans, and didn’t receive much financial support, but now the two events may bring Korea’s very first gold medal at the 2018 PyeongChang Winter Olympics.

Within the past few seasons, Korea’s two-man bobsled team - pilot Won Yun-jong and brakeman Seo Young-woo and skeleton racer Yun Sung-bin - have developed into players competing for the top spot in the world.

During the 2015-16 season, the two-man bobsled team, Won and Seo, became the top team in the world. Last season, Yun rose to second, right behind Martin Dukurs of Latvia.

Lueders was a gold medalist in two-man bobsledding at the 1998 Nagano Winter Olympics. As a coach, Lueders led Russia to its first gold medal in bobsledding during the 2014 Sochi Olympics. Florian Linder, who coached Russia with Lueders, joined the Korean team as a start specialist.

Bromley, who coached Korea since 2014, is an equipment specialist, managing Bromley Sports, one of the world’s top sled manufacturing companies. In addition, Fabio Schiess is an engineer who handles the sled runners.

It is rare for a national team to have eight foreign coaches. Lee Yong, head coach of the Korean bobsled and skeleton national team, said, “I don’t know how all these coaches gathered around here.”

The PyeongChang Olympics will be Lueders’ third consecutive Olympics as part of the host country team, as he competed in Vancouver, coached Russia in 2014 and will be once again a coach for the host country in 2018.

It wasn’t until preparing for the Sochi Olympics that foreign coaches started to play a role on the Korean team. At the time, Malcolm Lloyd was on Korea’s coaching staff, but in January 2016, he passed away. Though he didn’t have the best coaching ability, Lloyd was devoted to helping the team. But this season, the team is in a much better position.

“Everything I knew about the track has changed completely,” Won said. “With the help of the best coaches, I was able to fix my problems faster.”

Seo also saw improvement in his performance with foreign coaches, and has said, “They taught me to consider wind pressure as one of the factors in starting. It changed my start completely.”

While the players compliment their foreign coaches, the coaches also speak highly of the athletes and their spirit. During the summer, the team focused on physical conditioning and their start. Then, for three weeks in September, the team trained at Alpensia Sliding Centre in Pyeongchang, Gangwon, riding the track eight times a day.

Starting today, the Korean national bobsled and skeleton team will start its first race of the Olympic season, competing at the first series of the 2017-18 BMW IBSF World Cup series in Lake Placid.