Yongsan about to get a little more upmarket as U.S. army moves out

Yongsan about to get a little more upmarket as U.S. army moves out 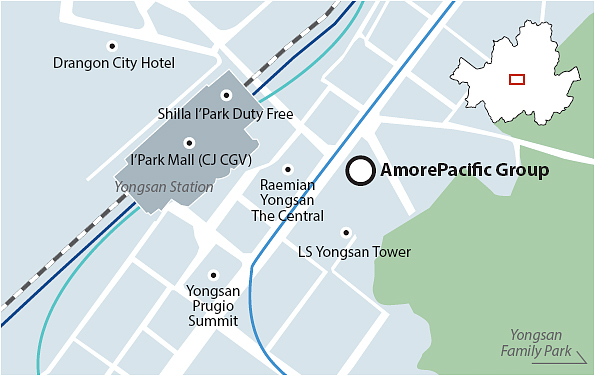 The completion of AmorePacific Group’s new headquarters heralds the so-called Yongsan era, a newly coined term to indicate numerous developments and real estate price hikes taking place simultaneously in an area of central Seoul which used to be known for housing a U.S. military camp and nothing more.

Since the camp’s removal was decided back in 2003, the rustic and underdeveloped part of the neighborhood has vanished. The unpaved road in front of Yongsan Station lined with street vendors has now been replaced with cultural facilities, shopping malls, high-end apartments and fancy hotels that are designed to accommodate not only domestic visitors but also foreigners as well.

Theater franchise CJ CGV re-opened its multiplex located inside I’Park Mall in July after going through a major renewal. With the ambition of creating a Hallyu theme park, Korea’s biggest movie and theater company partnered up with Hyundai Development Company (HDC), the shopping mall operator, to turn the outdated venue into a major tourist destination in Seoul.

The renewed multiplex encompasses the world’s biggest IMAX screens as well as other high-tech features including 4DX and Screen X theaters. It also features what’s called a movie theme park that exhibits movie-related installations based on films produced by CJ Group. Shilla I’Park Duty Free, which newly opened last year in cooperation with Shilla Duty Free and HDC, is expected to help lure more tourists to the area.

Hotel businesses are also setting their sights on the emerging neighborhood.

With the expectation of soon having one of Seoul’s biggest parks - the area that used to be home to the U.S. military camp - a number of premium apartment brands have set up outlets in Yongsan District as well.