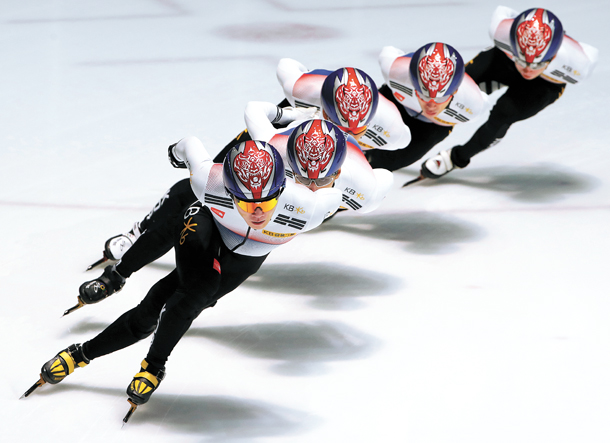 Korea will host the final qualification event for short track speed skating at the 2018 Winter Olympics this week.

The fourth and final leg of the International Skating Union (ISU) World Cup Short Track Speed Skating will come to Seoul’s Mokdong Ice Rink. The competition begins with heats on Thursday and Friday, and the finals will take place over Saturday and Sunday.

This is the final qualifying event for the 2018 PyeongChang Winter Olympics. A total of 110 Olympic spots, 55 each for men and women, are up for grabs, and quota places will be determined based on countries’ results at World Cup races. The three best results out of four World Cups in each event will be considered for Olympic qualification.

Regardless of its World Cup performances, Korea, as the Olympic host, will automatically enter five men and five women in all races at PyeongChang 2018 but will be limited to one skater in each race in that case.

Korea, long a dominant force in short track, will look to secure maximum quota places across the board on merit. In individual races, each country can have up to three skaters.

Through three World Cups, Korea has been its usual strong self.

Two-time world overall champion Choi Min-jeong has been the top female skater for Korea, with six golds and one silver.

Choi is the leader in the 1,500 meters, followed by teammate Shim Suk-hee. Choi won the 1,500-meter races at the first two World Cups and finished second to Shim in the third stop in Shanghai last weekend. Shim has a third-place finish in addition to her lone title in the 1,500.

Shim is third overall in the 1,000 meters so far, with Kim Boutin of Canada leading the way after winning the gold in Shanghai.

In the 3,000-meter relay, Korea leads all countries, thanks to two victories and one runner-up finish.

Korean women have long struggled in the 500 meters, the shortest race in short track, where stronger and more explosive skaters have thrived.

The story has been the same this season. Choi won the opening 500-meter World Cup race in Budapest late September, with Shim coming in at third, but no Korean has had a podium finish since then.

Arianna Fontana of Italy, who won a silver and a bronze in the 500 at the last two Winter Olympics, leads the 500 standings without a race victory. After Choi’s season-opening win, Marianne St-Gelais and Boutin, both of Canada, have split the 500 meters titles.

On the men’s side, 18-year-old Hwang Dae-heon has emerged as an ace in an inexperienced group.

Hwang, the youngest member of the men’s national team at 18, leads all skaters in the 1,500 meters with two victories and one second-place finish. He’s also third in the 500 and 1,000 rankings.

Hwang’s teammate Lim Hyo-jun has missed the past two World Cups with a back injury after winning both the 1,000 meters and 1,500 meters titles at the first World Cup.

Korea has yet to win a men’s relay gold, and its best performance this World Cup season has been the silver medal behind the United States in Shanghai last weekend.

The competition is also wide open for men. Canadian Samuel Girard is the leader in the 500 meters, and Sjinkie Knegt of the Netherlands is in first place in the 1,000.

Canada is the leader in the 5,000-meter relay with two victories.

In Olympic short track history, Korea leads all nations with 21 gold medals and 42 medals overall. No other country has reached double figures in the gold medal tally.