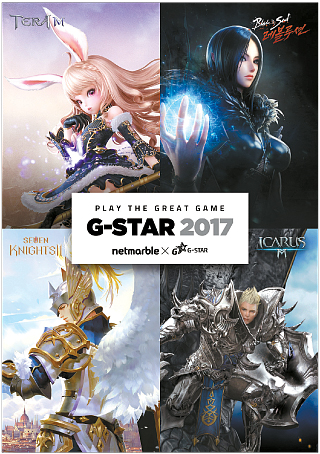 Netmarble Games will be participating in G-Star 2017 from November 16 to 19 at Bexco in Busan. The company will set up around 100 booths and introduce four new mobile games and offers diverse events for visitors to participate in.

Netmarble’s slogan for G-STAR 2017 is “Play the Great Game.” According to a spokesman of Netmarble, the slogan aims to show gamers that its new mobile games will provide a unique experience that goes beyond that of pre-existing mobile games.

Netmarble will install approximately 260 large-scale demonstration areas for visitors to play “Tera M”, “Blade & Soul Revolution,” “Seven Knights II” and “Icarus M” for the first time. Large LED screens and stages will give attendees the opportunity to learn about the new games.

During G-Star, visitors to the “Tera M” booth will get a chance to play the game for the first time. The multi-player game is based on the traditional party play method, where heroes with different characteristics cooperate to defeat a target, taking on roles such a tanker, dealer and healer.

There will also be a “Tera M” cosplay event, where fans are invited to dress as Elin, the game’s main protagonist. Those who upload photos of themselves in costume on social media will be provided with Netmarble Friends products on a first-come-first-served basis.

Min-ah, member of Korean girl group Girls Day and spokesmodel for “Tera M,” will appear at an event on Nov. 18 at 1 p.m. Participants who correctly answer Min-ah’s questions related to the game or who upload photos to social media will be given Netmarble Friends products. 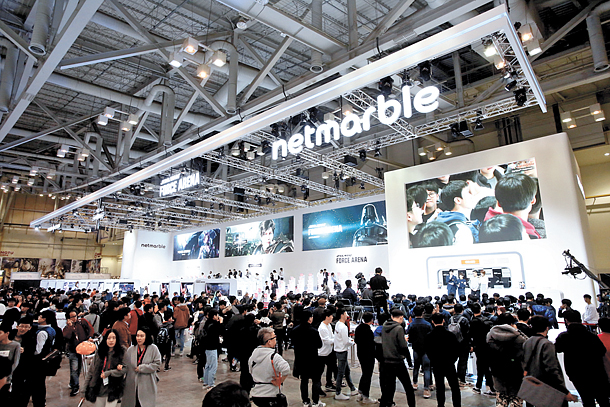 Under the slogan “Play the Great Game,” Netmarble Games will run approximately 100 booths at G-Star 2017 from November 16 to 19 at Bexco in Busan. [NETMARBLE]

Those who visit the “Seven Knights II” booth at G-Star will get experience different elements of the game. At one section, players can play with four types of new guardians of “Seven Knights II” and get to see the future of the Seven Knights. Once players finish this section, they will have the opportunity to enjoy a never-before-seen video.

Gamers will also get to experience the “Raid mode” which allows a maximum of 8 players to attack a large boss in real time. At G-Star, a total of 12 characters, including Rudy, Shane, and Yeon-hee from the first game in the series, will be available for gamers to play with.

At the “Blade&Soul Revolution” demonstration booth, players can enjoy games with four different charactersa. An open-field competition will take place at G-Star, and every participant will be given a special gift.

Visitors will be able to experience the new game by playing games with famous online gamers and will have multiple opportunities to take home prizes.

For those who cannot attend G-Star 2017, Netmarble will provide a livestream of the “Blade & Soul Revolution” booth on Facebook and Afreeca TV.

The “Icarus M” booth will give gamers the chance to try out mini-challenges they will face when the game is releases. An introduction to the characters and the powerful boss battles will be available for visitors.

Two characters, including Gladiator, will be open to public at G-Star, and other characters will be introduced when the game is officially released.