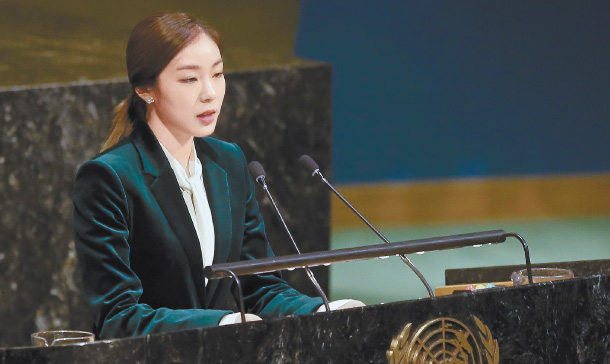 Korean champion figure skater Kim Yuna address the United Nations General Assembly after the country submitted a resolution calling for peace through sports and Olympic ideals on Monday at the UN headquarters in New York. The United Nations General Assembly adopted an Olympic Truce resolution ahead of the 2018 PyeongChang Olympic Winter Games, calling for the games to be an opportunity to promote peace on the Korean Peninsula. [AP/YONHAP]

The United Nations General Assembly adopted an Olympic Truce resolution ahead of the 2018 PyeongChang Olympic Winter Games on Monday in New York, calling for the games to be an opportunity to promote peace on the Korean Peninsula.

The resolution, entitled “Building a peaceful and better world through sport and the Olympic ideal,” called for nations around the world to suspend hostilities during the upcoming Olympic and Paralympic Winter Games hosted by South Korea in Pyeongchang, Gangwon, next February.

It urged member states to observe the Olympic Truce, recalling the ancient Greek tradition of ekecheiria, from seven days before the Games begin on Feb. 9 until seven days after the Paralympic Winter Games end on March 18.

This resolution called on countries “to ensure the safe passage, access and participation of athletes, officials and all other accredited persons” taking part in the upcoming Winter Games.

It also expressed expectation that the PyeongChang Olympics “will be a meaningful opportunity to foster an atmosphere of peace, development, tolerance and understanding on the Korean Peninsula and in Northeast Asia.”

Former figure skating champion Kim Yuna, a goodwill ambassador for the PyeongChang Winter Games, addressed the 193-member UN General Assembly that day, sharing her experience “in witnessing the power sport has in breaking down the walls of race, region, language and religion all around the world.”

“The Olympic Charter states the goal of Olympism is to place sport at the service of the harmonious development of humankind with a view to promoting a peaceful society concerned with the preservation of human dignity,” she said, in a speech ahead of the passing of the resolution. “I strongly believe this is the spirit of the Olympic Games, and it represents the potential and the power of sport.”

Kim continued, “I first experienced the same spirit and power when I was a 10-year-old watching the South Korean and North Korean delegations walk into the Olympic stadium together,” recalling the opening ceremony of the 2000 Sydney Olympic Games, when the two Koreas marched in under a single flag representing a unified Korean Peninsula.

“Today, I hope to witness this power again,” she continued. “Indeed, PyeongChang represents perhaps the most sincere effort to cross the frozen border between the South and North and to foster a peaceful environment.”

The two-time Olympian added that she is confident that the upcoming Games “will be one of best platforms not only for transmitting this message but for sharing the Olympic spirit of peace for humanity with the entire world.”

PyeongChang 2018 marks the first of three consecutive Olympic and Paralympic Games to be held in Asia, and will be followed by Tokyo 2020 and Beijing 2022.

The resolution noted “possibilities of new partnership in sport and beyond for Republic of Korea, Japan and China.”

The symbolic Olympic Truce resolution has been adopted every two years ahead of the summer and winter games since 1993.

The resolution was spearheaded by South Korea, who submitted it to the General Assembly on behalf of the Olympic Movement and the PyeongChang 2018 Organizing Committee (Pocog), led by its President Lee Hee-beom.

The South Korean delegation to New York included Minister of Culture, Sports and Tourism Do Jong-hwan, Ambassador to the United Nations Cho Tae-yul and Ambassador for Public Diplomacy Park Enna, who engaged in events promoting the PyeongChang Olympics.

The South Korean Ministry of Foreign Affairs on Thursday in a statement “welcomed” the UN resolution and added that “the expression of the expectation that it will help promote peace on the Korean Peninsula and in Northeast Asia reflects the Korean government’s commitment to make the PyeongChang event an ‘Olympic of Peace.’”

The Ministry of Unification said on the adoption of the resolution, “We look forward to North Korea being receptive in creating a path to peace on the Korean Peninsula, Northeast Asia and the international community.”

President Moon Jae-in in a Berlin address in July called for the participation of North Korea in the PyeongChang Olympics and urged Pyongyang “to utilize these series of precious events held in Asia as an opportunity for building peace on the Korean Peninsula, in Northeast Asia, and the world.”