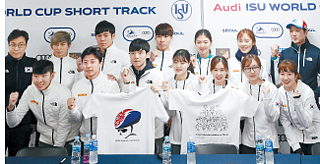 A pair of rising stars in Korean men’s short-track speed skating said Wednesday they’ll compete through injuries this week before a home crowd.

It will be the final qualifying event for the 2018 PyeongChang Winter Olympic Games. The three best results out of four World Cups in each race will be considered for Olympic qualification.

Hwang leads Korean men through three World Cups with two gold, three silver and two bronze medals, but he suffered an apparent arm injury during a fall at the third World Cup last weekend in Shanghai.

But the 18-year-old said his lingering pains won’t keep him off the ice this week.

“Since this World Cup is at home and is the last one before the Olympics, I wanted to feel the energy of the crowd,” Hwang said at a national team press conference at Mokdong. “I’ll do the best I can, but I won’t be forcing myself too hard.”

Lim, 21, picked up two golds and one silver at the first World Cup in Budapest in September, but also suffered a back injury, which kept him out of the next two World Cups.

Lim will make his return this week, but admitted he’s not quite 100 percent yet.

“I will try to do my best under the circumstances,” he said. “I’ve only competed in one World Cup, and so I felt I needed more experience to stay sharp. And since the Olympics is the most important competition, I’ll just look to enjoy myself here and skate before home fans.”

Korea, as the Olympic host, will be guaranteed to enter five men and five women in all races at PyeongChang, but will be limited to one skater in each race in that scenario.

But Korea, which leads all countries with 21 Olympic gold medals all-time, will look to secure maximum quota places across the board on merit. In individual races, each country can have up to three skaters.

Both Lim and Hwang will look to make their Olympic debuts in PyeongChang.

The country’s female skaters, namely Choi Min-jeong and Shim Suk-hee, have dominated their competitions in recent years, but the men’s team, which has gone through some turnover in recent years, hasn’t been nearly as successful.

At the previous Winter Games in Sochi in 2014, Korean men were shut out of the medals for the first time since 2002, and head coach Kim Sun-tae said it will be a very different story in PyeongChang next February.

“I think things have been going the way we’ve planned since the start of the World Cup season,” Kim said. “The new faces in the national team have been outstanding. We failed to win any medals in Sochi, and we’ll try to make up for that in PyeongChang.”