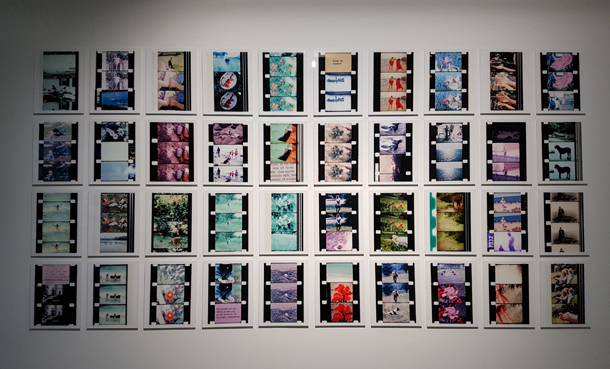 “Summer Manifesto” is a display of 40 images from Jonas Mekas’ 2008 film of the same title, comprising images of summer as a symbol of love. [YOON SO-YEON]

In film, flashback scenes are commonly shot to look as if they had been shot with a camera of the time period, when camera technology was far less developed than it is now. Aspects of a typical flashback scene, such as bright lights and low contrast or jerky movements and awkward framing create effects that mimic the ways that human memory can be filled with missing bits and gaps in between.

The many auteurs and video artists who use these techniques stand on shoulders of Jonas Mekas and the experimental grounds laid out by the master director during the 1960s and ’70s. Now open at the National Museum of Modern and Contemporary Art (MMCA) Seoul in central Seoul is an exhibition of his past works, titled “Again, Again It all Comes Back To Me in Brief Glimpses.”

In the first time an exhibition wholly dedicated to Mekas has been held in Asia, MMCA presents 14 of Mekas’ works that provide an overall view into his art world, including the movie “The Brig” (1963), “Destruction Quartet” (2006) and 40 portrait images of film directors featured in “Birth of a Nation” (2007). Although the exhibit rooms may seem humble compared to other tech-savvy exhibitions using computers or VR - the space features only videos playing on screens and photographs hung on the walls of the gallery - it is a chance to witness the works that have influenced film over the past century.

Widely known as the “godfather of American avant-garde cinema,” the 1922-born Lithuanian-American filmmaker is famous for his “single frame” filming method in which he uses only three to four frames per second, as opposed to the more-common 24 frames per second.

By minimalizing the number of the frames, Mekas disturbs the natural flow of the scene, instead achieving a visual jump in time to symbolize our imperfect memories and consciousness.

Mekas’ works deal with many different themes, but he mostly focuses on the devastating effects of violence and the gift of the ordinary life. As he had been locked up in a Nazi camp during World War II, he witnessed first-hand the destruction and catastrophe of war, which had a huge impact on his artistic philosophy.

“The title of the exhibition was created by Mekas himself, who found the best words to describe his artistic world,” said Kim Eun-hee, the curator of the exhibition. “Just like the name of the exhibition says, his films are like a collection of images that pass by in a flash of moment. Although he’s called the godfather of avant-garde cinema, Jonas himself didn’t want to limit himself to only that certain genre. Rather, he wanted to study the essence of filming, and extend the cultural limits of the media. ”

Visitors can also pop into the MMCA Film & Video theater for a screening of his works. From Nov. 22 to Feb. 25, 48 films shot by Mekas will be played throughout the day. This is a rare chance for fans to see his works in a cinema.