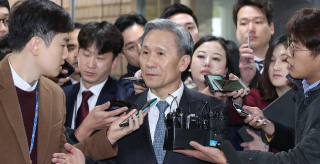 Former Minister of National Defense Kim Kwan-jin was arrested on charges of instructing the Cyber Command to meddle in domestic politics. [YONHAP]

What got President Park Geun-hye interested in “cyber defense” was a short briefing by Korea University professor and cryptology expert Lim Jong-in. When he had three minutes in the 30-minute Ministry of National Defense report to the Blue House in January 2015, he persuaded Park that cyberspace was the fourth territory after land, sea and space and that protecting it would determine the fate of the nation.

Lim said, “Just as President Park Chung Hee, your father, launched the Agency for Defense Development in the 1970s and established the foundation for self-reliant defense, you should focus on self-reliant cyber defense.” A few days later, President Park appointed him as a minister-level Blue House security adviser and created the position of cyber security secretary as he advised.

One year of service in the Blue House under the now-ousted Park may be a shackle for Lim. He had initiated the founding of the Department of Cyber Defense at Korea University, which is under criticism. It is allegedly involved in the manipulation of online posts by the ROK Cyber Command. The ruling Democratic Party also points out that the Department of Cyber Defense opened in 2012, around the time that public opinion manipulation began.

Also, the ruling party claims that then-Minister of Defense Kim Kwan-jin, who ordered the online posting manipulation, was actively involved in creating the department. The circumstantial suspicions made some young students despair. After the press reported that a total of 60 graduates of the department work for Cyber Command, the student organization complained about the report. Students feel shamed and angry that the school, which is supposed to educate officers to lead cyber warfare in the future, is derided as a school training online manipulators. Actually, the graduates are not working for the military, but develop and research cyber weapons at the Agency for Defense Development in Seoul.

The Department of Cyber Defense at Korea University was created five years ago, but is celebrated as a cradle of elites, attracting students with the top 0.1 percent of grades. Most of the 30 students were also admitted to Seoul National University, medical schools or the National Police University. It requires a higher KSAT score than the College of Science and Engineering at Seoul National University. The elite forces gave up the dream to pursue a professional career in medicine and instead are committed to serve seven years in national security. The department’s student group CyKor is a regular winner of the international hacking Olympiad. They are an essential workforce to protect and expand Korea’s cyber territory.

Cyber warfare often determines the future of nations. Estonia suffered a massive cyber attack in 2007 by a neighboring country, which resulted in paralysis of banks, government agencies, media and power plants. Nuclear power plant operators are more afraid of cyber attacks than nuclear attacks. From 2006 to 2010, a nuclear power plant in Iran was attacked by Israel’s Stuxnet, and the operation was halted. Hacking is not just stealing information, but penetrating and disabling government facilities or high-tech weapons like missiles.

Former Defense Minister Kim Kwan-jin has been arrested for having ordered manipulation of online posts. The prosecution targets Lee Myung-bak, who created the Cyber Command in 2010. But a call to shut down the command is unreasonable.

The United Nations has warned that World War III could be a cyber war, not a nuclear war.

Korean forces do not have cyber-related specialties, much less a cyber division. Major general-level commanders considers the Cyber Command a temporary position. The command has 600 members, less than one tenth of North Korea’s hacker warriors. Cyber defense itself is not a past ill just because Park abused it.