If U.S. asks too much, we may scrap FTA: Choo

If U.S. asks too much, we may scrap FTA: Choo 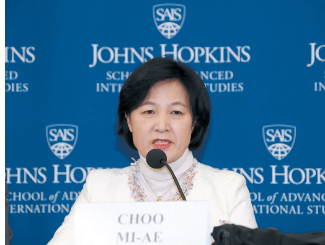 Chairwoman Choo Mi-ae of the ruling Democratic Party said it is “inevitable” that South Korea will scrap the free trade agreement with the United States if Washington keeps “asking for too much,” adding that in order to get re-elected, U.S. President Donald Trump appears to be more interested in creating more jobs at home than tackling trade issues with Seoul.

Choo made the remarks Wednesday in Washington as she was talking to South Korean reporters over lunch during a press conference. The chairwoman arrived in the United States on Monday for a six-day visit to talk with American government officials, lawmakers and North Korea experts about bilateral trade issues and the Kim Jong-un regime.

The Trump White House has taken issue with the country’s trade deficit and has been pushing for an amendment to the five-year Korea-U.S. Free Trade Agreement (FTA) for months, at one point even considering ending it.

During a joint press conference with President Moon Jae-in last week, Trump, who was in Seoul for a state visit, said the current deal was “quite unsuccessful and not very good.”

“Coming here, I realized that the United States doesn’t have any particular criterion” for revising the bilateral trade deal with South Korea, Choo said Wednesday. “Rather, I think it’s focusing more on solving employment issues within its own country.”

Trump, she continued, “has his mind set on re-election and is trying to attract support from his white base, which feels nostalgia for the past heyday of America’s auto industry. That’s why he’s going so far as to claim that auto parts have to be procured within the U.S., which our side is stressing we can’t accept because it’ll be a major blow for our automotive vendors.”

Cho said she warned Gary Cohn, director of the White House National Economic Council, whom she met at the White House on Tuesday, that South Korea’s National Assembly “won’t be pleased if Washington keeps pressing Seoul to further open its agricultural market.”

On the possibility that the United States might enforce a safeguard measure on Korean washing machines, Choo said she brought the issue up during her talks with Cohn, but was told that it was a “small issue,” and that the “larger issue was with the cars.”

Choo said she replied, “And that’s why we promised to buy more weapons [from the United States], which is a much larger issue.”

On Wednesday in an open discussion session, Choo discussed the North Korea nuclear crisis with Robert Gallucci, chairman of the U.S.-Korea Institute of the Johns Hopkins School of Advanced International Studies, where she said it was Korea’s “fundamental premise” in diplomatic policy to erase any discrepancies with Washington.

The remarks were made after she was asked to assess Washington’s North Korea policy, which critics say divulge from Seoul’s conciliatory approach. Choo was planned to meet with U.S. trade representative Robert Lighthizer and Ricky Waddell, deputy national security adviser to Trump, on Thursday, after which she will have an interview with The Washington Times and meet with Korean immigrants in New York.