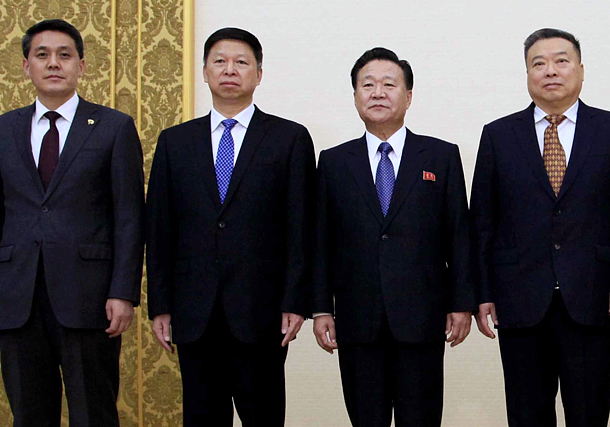 Chinese President Xi Jinping’s special envoy to Pyongyang, Song Tao, met with a series of North Korean officials over the weekend to discuss the situation on the Korean Peninsula, and much attention was fixed on whether the diplomat would meet leader Kim Jong-un.

Song’s trip to Pyongyang follows U.S. President Donald Trump and President Xi’s bilateral talks earlier this month and speculation that they may have reached some sort of breakthrough on an approach to the North Korean nuclear crisis.

Trump fueled the speculation by tweeting Thursday, “China is sending an Envoy and Delegation to North Korea - A big move, we’ll see what happens!”

Trump toned down his fire and brimstone rhetoric toward Pyongyang in recent weeks, and North Korea has not conducted any ballistic missile launches over the past two months.

A meeting between Song and Kim Jong-un was seen as an opportunity for the envoy to deliver a letter from Chinese President Xi and discuss the North’s nuclear and missile tests.

But some analysts and China’s state media have been cautious about overly high expectations for Song’s visit. China sends a special envoy to Pyongyang to explain the results of its party congress, held every five years, as it did in 2007 and 2012.

Song, the head of the International Liaison Department of China’s Communist Party and a former vice foreign minister, led a delegation to inform Pyongyang officials about the results of China’s 19th Communist Party National Congress, which concluded last month.

He also visited Vietnam and Laos earlier this month to inform officials there about the results of the party congress, which further cemented Xi’s grip on power.

Song arrived in Pyongyang on Friday and kicked off his trip with a meeting with Choe Ryong-hae, a vice chairman of the North’s ruling Workers’ Party Central Committee who is considered the second-most powerful figure in the regime, at Mansudae Assembly Hall.

This marks the first time a high-level Chinese official visited the country in over a year.

On Saturday, Song held talks with former Foreign Minister Ri Su-yong, a vice chairman of the Central Committee of the North’s Workers’ Party.

The two sides “exchanged their views on such matters of mutual concern as the situation of the Korean Peninsula and region and bilateral relations,” reported the KCNA that day.

The details of Song’s itinerary have not been made public, but his trip was expected to last four days.

He is the first ministerial-level Chinese official to visit Pyongyang since October 2015, when Liu Yunshan, then a member of the Chinese Politburo Standing Committee, met North Korean leader Kim.

The North’s official Rodong Sinmun reported Sunday that the Central Committee of the Workers’ Party hosted a banquet Saturday evening for Song, without further details, such as whether the Chinese official would meet Kim.

Since taking office after the death of his father, late leader Kim Jong-il, in December 2011, Kim has yet to meet Chinese President Xi.

Despite Washington pushing Beijing to do more to put pressure on Pyongyang, China has said it is up to the United States to show resolve and reassure the North of its security.

An opinion piece by China’s state-run Global Times newspaper on Friday said on the special envoy’s visit, “Song is not a magician. The key to easing the situation on the peninsula lies in the hands of Washington and Pyongyang. If both sides insist on their own logic and refuse to move in the same direction, even if Song opens a door for talks, the door could be closed anytime.”

It said that the United States needs “real resolve and drive to change the situation” on the Korean Peninsula, and that allowing Pyongyang to “have a sense of security is the prerequisite for resolving the peninsula nuclear issue.”

The Trump administration has adopted a “four nos” policy: it will not seek regime change in North Korea, a regime collapse, an accelerated reunification of the Korean Peninsula or military deployment north of the 38th parallel dividing the peninsula.

U.S. Defense Secretary Jim Mattis told reporters aboard an Air Force aircraft en route to Colorado Springs Thursday, “So long as they [North Korea] stop testing, stop developing, they don’t export the weapons, there would be opportunity for talks.”

He continued, “If they stop their shooting missiles, stop developing nukes, stop building more nukes, we can talk.”

On North Korea refraining from testing a ballistic missile over the past two months, Mattis said, “We’re watching it closely,” without confirming if this was a positive signal.

Trump said in a speech Wednesday that Xi had agreed not to accept the so-called “freeze for freeze” agreement in which North Korea declares a suspension of its nuclear and missile tests in exchange for South Korea and the United States halting joint military exercises.

China’s Foreign Ministry responded that its “suspension for suspension” initiative is the most “reasonable proposal” to ease tensions.