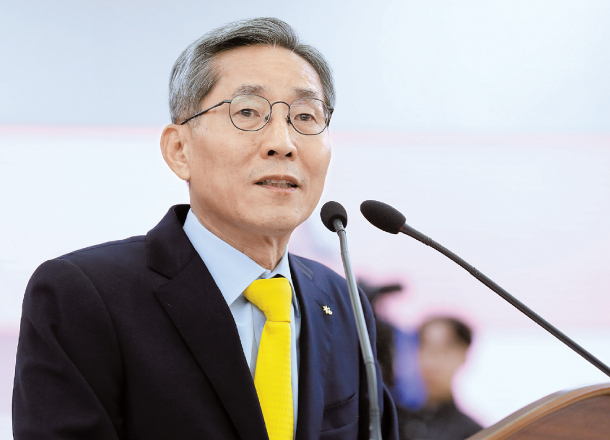 Yoon Jong-kyoo, chairman of KB Financial Group, speaks at a shareholders’ meeting at the headquarters of KB Kookmin Bank in Yeouido, western Seoul, on Monday. [YONHAP]

While KB Financial Group Chairman Yoon Jong-kyoo succeeded in extending his term for another three years, controversy over a labor union proposal to introduce a new outside director still remains an issue.

According to the banking group, shareholders held a meeting on Monday where they passed a proposal to extend the tenure of current chairman Yoon as well as approving the nomination of Huh In to head KB Kookmin Bank.

Yoon was approved after his contribution to improving the bank’s performance and turning its fortunes around after a crippling internal management conflict in 2014.

KB Kookmin Bank’s new president Huh will be serving in the position for the next two years.

However, the banking group’s conflict with its labor union is expected to continue, with a proposal to introduce a new system where the labor union can propose an outside director rejected by shareholders.

The issue drew a lot of attention as it would have given the labor union more influence on management decisions with a director to represent them.

However, during the shareholders’ meeting the system was denied after foreign investors, which control a 69 percent stake in the banking group, voted against it on the grounds of protecting free management.

Despite the labor union’s proposed system failing to win shareholders’ confidence, the union made it clear it is not retreating.

“We have accepted the decision of the shareholders and we are withdrawing our proposal [today],” said Park Hong-bae, the banking group union representative. “We will again pitch our proposal during the regular shareholders’ meeting [in March] next year.”