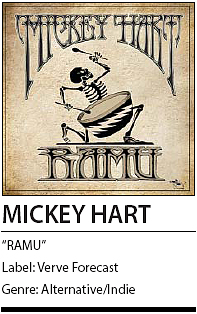 There’s plenty of movement on Mickey Hart’s 14th studio album, as the Grateful Dead drummer extends his prolific solo career centered on his amazing approaches to percussion, knowing expeditions into world music and the cross-pollination between music and science.

“RAMU’’ stands for “Random Access Musical Universe,’’ Hart’s ever-expanding database of recordings including a wide array of rhythms, loops, samples and digital and analogue sounds. Hart has turned it into a musical instrument he “plays’’ by way of dials, pads and pedals. It’s like hearing a performance of the Smithsonian Institute.

His cosmos includes resources like the tongue-tying cadences of a tobacco auctioneer circa 1944, a song from eastern Peru and archive performances from late bandmate Jerry Garcia and Nigerian drummer Babatunde Olatunji, both frequent collaborators on Hart’s solo albums.

Be that as it may, the powers of “RAMU’’ stem from Hart’s ability to calibrate layers upon layers of rhythms and melodies from bountiful sources - fine tuning instead of Auto-Tuning.