Two silver medals, one in 2002 and one in 2010, are all that Korea has ever taken home from the Winter Paralympic Games. That might be about to change, as para-nordic skier Sin Eui-hyun is a favorite to reach the podium in Pyeongchang next year. 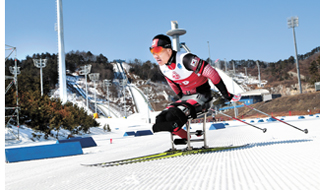 The 2016-17 season was only Sin’s third as a para-skier, but he managed to win two events at the International Paralympic Committee World Cup race in Western Center, Ukraine. Sin continued his success at the 2017 World Para Nordic Skiing Championship in March at Pyeongchang Alpensia Resort, winning gold in the 15-kilometer sitting cross-country race, silver in the 7.5 kilometer sitting biathlon sprint and bronze in the 7.5 kilometer sitting cross-country race, becoming the first Korean to medal at the World Championship.

“I received a lot of support ahead of the Paralympics,” Sin said. “I had a lot of training during the offseason. In long distance, where it requires a strong mentality, I’m confident that I won’t lose to anyone.“

Sin, born in Gongju, South Chungcheong, lost both his legs in a car accident a day before his college graduation in February, 2006. Once he recovered from surgery, Sin struggled to come to terms with losing both his legs.

It wasn’t until 2009 that Sin started to come to terms with what had happened. Taking up wheelchair basketball changed everything.

He further challenged himself to take up sledge hockey and wheelchair cycling. Finally, in August, 2015, Sin started para-skiing by joining the Changsung Engineering and Construction Para Skiing Team. Para-nordic skiing was the perfect sport for Sin and he won two bronze medals within six months of starting the sport at the IPC Nordic Skiing World Cup in March 2016.

Despite a health scare earlier in the year, Sin has been training hard for the Paralympics. He has spent time in the United States, Finland and New Zealand as part of a comprehensive training regime.

“Whenever I have a hard time, I think about the PyeongChang Paralympics,” Sin said. “If I didn’t start playing sports, I would be living a desperate life. I want to give hope to people with disabilities by winning a gold medal at the Paralympics.”