2017 birthrate set to be lowest yet

2017 birthrate set to be lowest yet 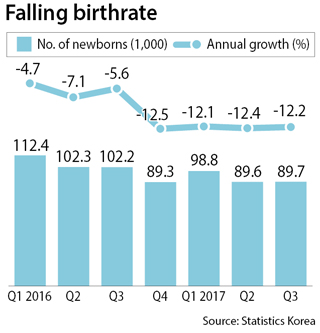 A 41 year-old entrepreneur surnamed Chung has been married for more than seven years. But Chung and her husband have agreed not to have children.

“These days, you don’t necessarily have to have children to be happy,” Chung said.

Instead, the two enjoy taking trips overseas whenever they find the opportunity or share their hobbies. A young couple in their mid-30s, who are residents of Hongdae in western Seoul, say they plan on living their lives without having children and their close friends who are also married share their philosophy. The couple recently went to Vietnam to learn surfing during the 10-day Chuseok holiday.

As concerns grow over the shrinking population that may hurt Korea’s potential growth, it turned out that the number of newborns may fall below 400,000 for the first time since records began by the end of this year.

According to Statistics Korea, the number of babies born in the first nine months of the year amounted to 278,100, which is a 12.2 percent drop compared to the same period last year.

Last year there were 406,243 babies born. Considering the pace so far this year, it is unlikely that the figure will come close to the 400,000 threshold.

In fact, the number of newborn babies since the fourth quarter of last year has been shrinking 12 percent every quarter. In the third quarter this year alone the number declined 12.2 percent compared to the previous year.

According to LG Economic Research Institute, by 2027 the economically active population will shrink by 7 percent. The number of people in their 20s will shrink by more than 20 percent. As a result Korea’s potential economic growth in the 2020s will fall to 2 percent from the current 2.8 to 2.9 percent. The shrinking population was also a concern that the International Monetary Fund raised during visits earlier this year.

The Presidential Committee on Aging Society and Population Policy plans to unveil measures to help increase the current low birthrate. “We will focus on helping young couples live happily by marrying after dating and giving birth without difficulty,” said Kim Sang-hee, a Democratic Party lawmaker who is second in command of the committee after President Moon Jae-in.