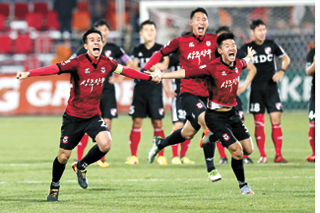 Both sides went to a penalty shootout after they were tied 1-1 on aggregate even after 30 minutes of extra time in the K League promotion-relegation playoff at Sangju Civic Stadium in Sangju, 270 kilometers (168 miles) south of Seoul.

In the penalty shootout, which was played on the newly introduced “ABBA” format, all of the kickers found the net, except Busan’s Ko Kyung-min who saw his spot kick going over the crossbar. After Ko’s miss, Busan captain Lim You-hwan scored his penalty to make the score 4-4, but Sangju’s last kicker Joo Min-kyu slotted the ball home and confirmed his club’s spot in the first division K League Classic next season.

Sangju dropped into the playoff after finishing in 11th place among 12 clubs in the Classic. Each season, the last place club in the first division is demoted directly to the low-tier K League Challenge, while the second-to-last team must survive the playoff series to stay in the Classic.

Busan finished second in the Challenge this season, and earned the right to face Sangju after beating Asan Mugunghwa FC 3-0 in the Challenge playoff. Busan were looking for the top flight return since 2015.

This is the first time that a Classic club has survived in the promotion-relegation playoff since such system was introduced in 2013.

A draw at home was enough for Sangju to clinch Classic survival since they won the first leg 1-0 on Wednesday. However, it was the visitors who scored the only goal.

Busan were awarded a penalty in the 14th minute after their striker Lee Jeong-hyeop was brought down in the box by Sangju defender Yun Yeong-seon. The referee reaffirmed his decision after video review and Brazilian midfielder Romulo converted the spot kick to make the score 1-0.

In the second half, both teams were able to score, but their goals were canceled after reviewing the video assistant referee (VAR) system.

Sangju forward Yoo Jun-soo beat Busan goalkeeper Kim Hyung-geun with his right foot in the 61st after receiving Kim Tae-hwan’s cross from the right flank. The referee, however, ruled after video review that Sangju midfielder Yeo Reum was in an offside position before Yoo’s strike and cancelled the hosts’ equalizer.

In the 65th, Busan forward Park Jun-tae slotted home the rebound following Lim Yoo-hwan’s header off Romulo’s free kick. Park’s goal, however, was not accepted after the VAR system showed that Busan players were in an offside position when Romulo was taking his free kick.

After 90 minutes of regulation ended with a 1-0 win for Busan, both teams entered overtime to determine the winner as the aggregate score was tied at 1-1, but neither broke the deadlock. The two sides eventually entered penalties and Sangju were declared the lucky winners after a nail-biting shootout.