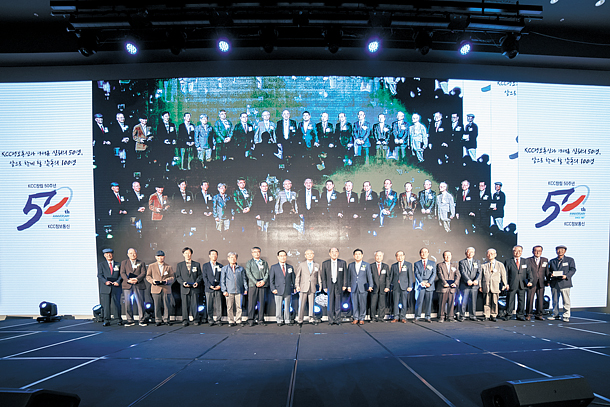 KCC I&C, a company specializing in computer programming, marked its 50th anniversary on Oct. 12 with an event attended by 700 executives, employees and VIP guests at the Seoul Dragon City Convention Center in Yongsan District, central Seoul.

A video reflecting on the company’s 50-year history opened the event, followed by remarks from Lee Chu-yong, chairman and founder of the company.

Lee Sang-hyun, vice president of KCC, delivered a message of thanks during a ceremony declaring the company’s business values. After the toasts, actress Choi Jung-won gave a special performance along with the musical team MUSE.

On one corner of the event hall was an exhibition of KCC’s company magazines, a total of 95 issues with diverse stories from the company’s 50-year history.

A photo wall featuring pictures of company staff and executives adorned one side of the hall. The photos were part of a project conducted across six months starting from April, under the theme “the company belongs to employees.” Some 2,000 employees from across the country working at KCC as well as affiliates KCC Holdings, Jongha E&C and KCC Auto Group were photographed. 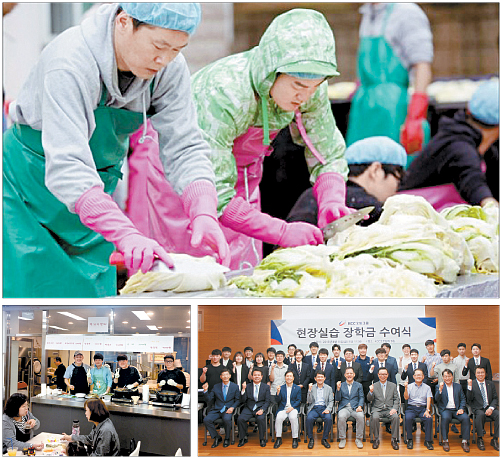 The company established the Jongha Student Scholarship Foundation in 1985. The foundation has provided scholarships and research funds for about 2,500 Korean middle, high school and college students as well as students studying abroad. It has also provided financial support for Korean universities and the University of Michigan’s Korean studies center. The foundation seeks out students with excellent academic records, high potential and promising futures.

In 2014 and 2015, new recruits provided their services at a job training center in Gangseo District, western Seoul. Last year, 20 employees visited a social welfare center in Deungchon-dong, western Seoul, to help the center tidy up its warehouse space.

Employees donate blood and carry a blood donor card that can help them move up priority lists when requesting blood.

Ae Ran Won is a nonprofit that supports single Korean mothers. Employees at KCC participated in Ae Ran Won’s bazaar and sold food and drinks to support the organization.

• Support for the hearing impaired

Since 2008, KCC Auto Group has been donating to a support group for hearing-impaired Koreans. The company also donates 10,000 won ($9) from each car sale to support Cochlear implant surgery for children.

• Kimchi making at the House of Peace

Every winter, KCC employees volunteer at the House of Peace, a center for disabled people, and make kimchi.