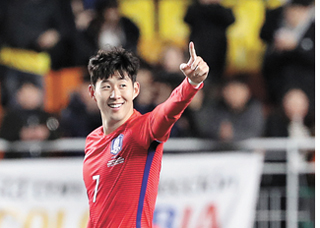 The award is given each season to the top Asian football player in a foreign league. This is Son’s second time receiving the award, the last time being in 2015.

“The 2016-17 season proved to be a stellar one for Son at the club level, as he helped guide Tottenham to the second spot in England’s top flight,” the Asian Football Confederation said in a statement. “Son has also been an integral part of his nation’s FIFA World Cup 2018 qualification.”

The 25-year-old striker scored 21 goals in the English Premier League and UEFA Champions League last season. He broke the single-season scoring record for a Korean in Europe previously held by Cha Bum-kun, who scored 19 goals for Leverkusen in 1985.

Son also broke the record for a Korean scorer in the EPL after netting his 20th EPL goal against Crystal Palace on Nov. 5, breaking the record held by Park Ji-sung.

Most recently, Son scored his fourth goal of this season during a UEFA Champions League Group H match against Borussia Dortmund, helping Hotspur finish first in the group match at 13 points.

Son wasn’t the only Korean player to receive accolades from the Asian Football Confederation. The governing body selected 19-year-old Lee Seung-woo of Hellas Verona as its youth player of the year.

The Asian Football Confederation highly rated Lee’s performance in the U-20 FIFA World Cup, in which he led Korea to the round of 16 by scoring two goals.

On the women’s side, Sung Hyang-sim of North Korea was chosen as youth player of the year. The 17-year-old is the first North Korean football player to win the award.

Sung was also one of candidates for women’s player of the year, but the award went to Sky Blue FC striker Samantha Kerr of Australia.

Takafumi Hori and Asako Takakura of Japan won the awards for coach of the year in men’s and women’s, respectively.