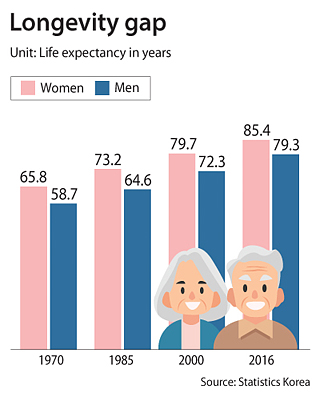 Overall, current 1-year-olds can expect an average lifespan of 82.4 years, up 20.1 years from babies born in 1970. The figure indicates significant quality-of-life improvements from over a generation ago.

The longevity gap continued to widen until 1985, when it reached a peak of 8.6 years, and then began to narrow to the current six-year gap.

Tuesday’s data applies to the 406,300 babies born last year. The number of births was a seven-year-low, falling 7.3 percent from a year earlier. The figure roughly translates to a fertility rate of 1.17 children per woman, one of the lowest in the world.

Korean life expectancy has gradually risen in line with the country’s economic growth over the past half century, from the low 60s in 1970 to 70 in 1990. It took another 20 years for the country to reach a life expectancy of 80 years.

Statistics Korea projected that life expectancy could rise for both genders by 3.9 years if there are medical breakthroughs in cancer research, while heart disease-related breakthroughs will boost the figure by 1.5 years.

The data showed that Koreans born last year have a 21.3 percent probability of dying from cancer. For heart disease, the probability of death is 11.8 percent, and for cerebrovascular diseases, it is 8.8 percent.