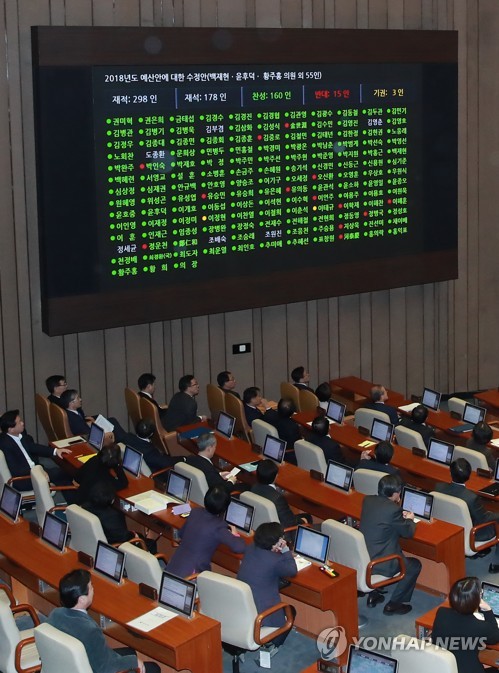 The National Assembly passes the 428.8 trillion won government budget for 2018 in Seoul on Dec. 6, 2017. The budget was approved 160-15, with the main opposition Liberty Korea Party (LKP) boycotting the vote in protest. The LKP was outnumbered by the ruling and minor opposition party lawmakers, who had struck a compromise. (Yonhap)

The National Assembly approved the government's budget for next year early Wednesday as the main opposition party boycotted the vote to express its objection to some contentious points in the bill, such as the creation of thousands of new government jobs.

The 428.8 trillion won ($394.4 billion) budget, which passed in a 160-15 vote, centers on creating thousands of new government jobs, expanding welfare programs, and increasing the minimum wage. To fund the increased spending, it calls for raising the corporate and income tax rates for big businesses and top earners.

The main opposition Liberty Korea Party stayed away from the vote in protest.

The rival parties had haggled over key sticking points, such as the number of government jobs to be newly created, leading to the missing of the legal deadline for the budget's passage for the first time since the enactment of a law in 2014 aimed at minimizing partisan fighting.
On Monday, the ruling Democratic Party, the main opposition LKP and minor opposition People's Party reached a compromise by trading concessions on major points of contention, but the deal was short-lived as LKP lawmakers rejected it the following day.

Despite the objections, the deal passed through the Assembly as it is, as the ruling party and the minor opposition People's Party joined forces to approve the bill. Their combined strength in the 299-member legislature is 161 seats.

Major bones of contention in the original budget bill were a proposal to use 534.9 billion won to support President Moon Jae-in's push to create 174,000 new public service jobs by 2022 and the 3 trillion-won "job stability" plan to bankroll next year's minimum wage increase.
Opposition parties sought to reduce the number of public sector jobs to be created, arguing that such a sharp increase would put too much of a burden on future generations. They also demanded the job stability plan be applied for only one year.

Under Monday's provisional deal, the parties agreed to set the number of new public service jobs at 9,475, down from the 12,221 initially proposed by the ruling party and the Moon administration as part of the government's key job creation plan.

The budget bill also calls for spending 2.97 trillion won next year in the state subsidy for smaller businesses against the burden of the planned minimum wage hike, with the amount for the 2019 subsidy not to exceed the previous year's expenditure.

The legal minimum hourly rate will increase 16.4 percent to 7,485 won.

The proposed rise in basic pension to 250,000 won and provision of children's allowance of 100,000 won per household will come into effect starting next year in line with the government's plan, with the time of implementation and the scope of the beneficiaries to be slightly adjusted in the opposition parties' favor.