Lessons from the ’90s

Lessons from the ’90s 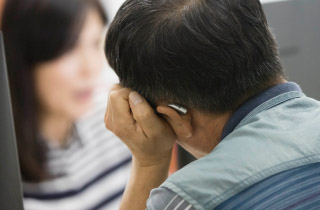 According to Statistics Korea, the number of Koreans who could not find jobs for at least six months after being laid off has reached a record level since the foreign exchange crisis in 1997-98. [YONHAP]

A recent poll showed that the second-biggest shock South Koreans have borne after the 1950-53 Korean War was the foreign exchange crisis in the late 1990s. That is hardly a surprise. Korea had to seek a bailout by the International Monetary Fund to avoid national bankruptcy and in return hand over policy making authority to the international lender. Ordinary people willingly surrendered their gold jewelry to help the country fight the unprecedented liquidity crisis.

Exactly two decades have passed, but we appear to have already forgotten the painful and humiliating event. In fact, we should remind ourselves regularly of the causes of that major stumble and learn lessons to not repeat them.

The primary cause of the crisis was a collective failure of the government, business, and financial institutions in reading the changes in the world economy and responding to them. Korea Inc. was slow to catch up with new paradigms in the global economy of fast integration and borderless competition as the result of rapid advances in technology.

A few chaebol that flourished on home turf by dominating some industries proved vulnerable to fierce competition from multinational companies. Banks and other financial institutions lacking expertise and experience also fared pitifully on the international stage. The government made things worse by failing to raise the financial rules to international standards and pave the way for corporate restructuring to strengthen our industries to better compete in the new environment. A financial crisis was probably inevitable.

There is a saying that only a crisis can bring about meaningful change. An economic crisis set the momentum for restructuring and reforms that would otherwise have been strongly resisted. The pressure came from a set of IMF prescriptions to restructure the corporate, financial and labor sectors in return for the bailout.

A Japanese economist wrote that he envied South Korea for getting the IMF fix, arguing that Tokyo also needed outside pressure to push the Japanese economy out of a recession that went on for a decade due to weak political leadership.

In collective efforts to shake off the shameful status of going to the IMF with a begging bowl, the Korean financial and corporate sectors took the painful doses of medicine in stride. But if the endeavors had continued with a long-term outlook — instead of the goal of graduating from the IMF program as fast as possible — many of today’s problems in the labor, financial, corporate and public sectors could have been prevented in advance.

Upon graduating the IMF program well ahead of schedule, Korea went on a credit-card spending binge to prop up the economy through spending. Policies centered on fast growth neglected restructuring. Our industries lost the determination to press on with voluntary restructuring after the early stages of the crisis.

Today’s changes around the globe beg us to look back at the fundamental causes and lessons of the IMF crisis. The global economic order and competition paradigm is going through an entirely new type of evolution from the onset of the so-called fourth industrial revolution. Reforms in labor, financial, public and education sectors are essential as they are way behind the times. The government must re-examine and balance its short-term economic stimuli to increase incomes for growth and adopt a long-term plan to promote innovations to boost growth potential.

The government must not overlook the fact that its public role to stimulate income growth through fiscal spending could not only lead to hikes in taxes and the national debt, but also weaken the corporate sector’s will to achieve innovative growth. As one said, a crisis does not come as fast as people think, but can progress faster than they think.