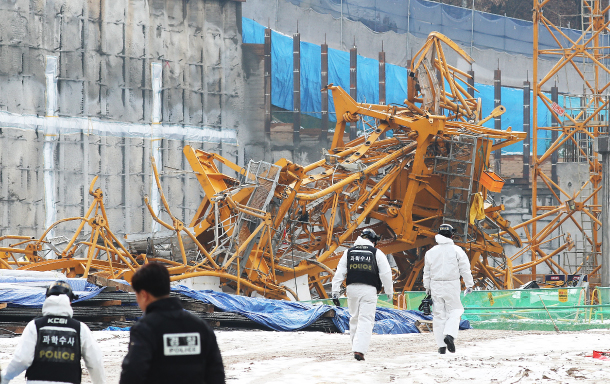 Police and National Forensic Service authorities conduct a joint investigation Sunday on the crane crash that killed three and injured four at a construction site in Yongin, Gyeonggi, on Saturday. [YONHAP]

A tower crane killed three and injured four on Saturday on a construction site in Yongin, Gyeonggi - the third fatal crane collapse in Gyeonggi this year alone.

On Saturday afternoon, seven workers were on a crane engaged in telescoping work, the process of extending the crane’s length by fastening new parts. Hired by subcontractors, they had been working on a four-story warehouse due for completion next August. Around 1:11 p.m., the midsection of the 40-ton crane gave in, causing the workers to fall 75 meters (246 feet). Three died, including a veteran with over two decades of experience. Four suffered injuries and one worker is in critical condition.

Investigations found that the construction manager was off duty Saturday, leaving the safety manager in charge. The crane was also discovered to have been imported a year ago, though its date of manufacture is still unknown.

This latest accident comes on the heels of another fatal crane-related accident in October in which three workers died in Uijeongbu, Gyeonggi. 17 people have died in 2017 so far from accidents involving tower cranes. In May, an 18-ton tower crane fell on an apartment construction site in Namyangju, Gyeonggi, killing three. In the same month, six died when a tower crane fell at a shipyard operated by Samsung Heavy Industries in Geoje, South Gyeongsang.

To address the dangers of these “weapons in the sky” - a dark nickname given to cranes by construction workers - the Ministry of Employment and Labor and the Ministry of Land, Infrastructure and Transport announced a “Tower crane disaster prevention proposal” on Nov. 16. The proposal includes prohibition of use of all tower cranes 20 years or older, and stricter examinations of cranes over 15 years old. The crane that collapsed in Uijeongbu was 27 years old.

There are currently 6,074 tower cranes registered in the country, according to the Employment and Labor Ministry. Of these, 44.4 percent are over 10 years old and 20.9 percent are over 20. Some 57 percent are imported. China is the biggest exporter of cranes to Korea, accounting for 22 percent of all cranes in the country. Many in the industry complain that dishonest Chinese exporters add to crane-related dangers by lying about the cranes’ date of manufacture. Construction workers also suggest that crane-related dangers could be mitigated if institutions entrusted by the Land, Infrastructure and Transport Ministry to conduct regular examinations on cranes do their job more thoroughly.

Police and several institutions including the Employment and Labor Ministry and the National Forensic Service conducted a joint investigation yesterday on the site of the Yongin accident.

A witness told police that the crane had moved immediately before the crash. If this testimony is true, human oversight could be determined as the primary reason for the accident.

“After investigating the causes of the accident, we will take all responsible parties into account,” said Yi Sung-Ki, vice minister of employment and labor, when he visited the scene of the accident Saturday.