Paving our own path

Paving our own path 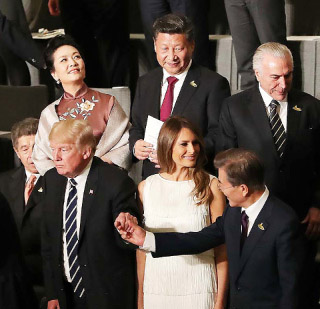 A scene from the Group of 20 summit on July 9 in Hamburg, Germany. [YONHAP]

Alexander Hamilton is credited for having laid the foundations for the U.S. economy. Unlike other founding fathers who envisioned an agrarian republic for the new nation, he championed a commercial economy backed by financial and manufacturing prowess. His Report on Manufacturers published in 1791 “not only reshaped America’s economy but was channeled half a century later to play a central role in Germany’s industrialization, and still later became a canonical text in Japan,” said Stephen Cohen and J. Bradford DeLong in their book “Concrete Economics, The Hamilton Approach to Economic Growth and Policy.”

Core components of the Hamiltonian system are high tariffs and high spending on infrastructure with backing from the federal government and central bank. The goal was to buttress industry to topple Great Britain, which was the world’s dominant industrial power. Revenue from tariffs subsidized companies to increase their capacity and develop new technologies. The authors argued that Hamilton’s pragmatic prescriptions saved the United States from turning into an agrarian backwater and a British economic colony and set the grounds for an industrial renaissance.

A country’s political, economic and foreign policies can have roots in the past. They return to proven models. So-called “path dependency” is more common in powerful nations, as they can look back on their heydays.

Hamilton’s way is what the U.S. and Chinese governments resort to now. President Donald Trump did not invent trade protectionism. Hamiltonian tariffs stayed notoriously high in the United States for a century until World War II.

The U.S. International Trade Commission has recommended the president invoke a Section 202 safeguard to levy 50 percent tariffs on home washing machines built by Samsung and LG Electronics as well as a quota restriction, claiming that large quantities of Korean washers have injured America’s industry. It argued that such high tariffs will help one of its own — Whirlpool — which filed petitions against its Korean rivals, create 1,300 jobs, and enhance its investments and competitiveness. The commission paid little attention to consumer rights, distortion of free trade, or the heavy blow it will deal to Korean manufacturers.

Washers may be just the beginning. U.S. companies have been filing complaints about Korean steel, solar panels, chemicals and semiconductors. Washington is using not only regular antidumping duties but also digging out a long-abandoned safeguard: Section 232 of the Trade Expansion Act of 1962, which enables the Commerce Department to conduct comprehensive investigations on the effects of imports on the national economy. It doesn’t matter that its actions go against World Trade Organization (WTO) principles. The only strategy the Korean government has against such a belligerent trade policy by Washington seems to be trying to win Trump’s favor.

China is even blunter under President Xi Jinping. The United States at least pretends to keep to procedures. The financial toll from China’s year-long economic retaliations over the deployment of the Terminal High Altitude Area Defense (Thaad) antimissile system has topped 20 trillion won ($18 billion), but Beijing claims no wrongdoing. Lotte Group had to pull its entire grocery business out of the country after being plagued by punitive actions for yielding its land to host the Thaad battery. China’s state media has even been demanding President Moo Jae-in publicly promise the so-called three nos — no additional Thaad deployments, no joining of a broader U.S. missile defense system, and no Korea-U.S.-Japan military alliance — which Beijing reportedly demanded in return for normalizing ties frayed over the Thaad issue.

Beijing remembers how successful it had been with its retaliation for Seoul’s safeguard action on Chinese garlic imports. It still seems to regard Korea as a tributary state. Ancient China was the world’s biggest trader. Its emperor was able to dictate terms of trade. Xi may want such a power over Korea. We must not yield to such bullying. Otherwise, more companies will have to fold their businesses in China. We must stand up to what is unjust. The people must be united. If we cannot pave our own path, we could be pulled into the U.S. and Chinese ones. We must show we are not to be tamed.