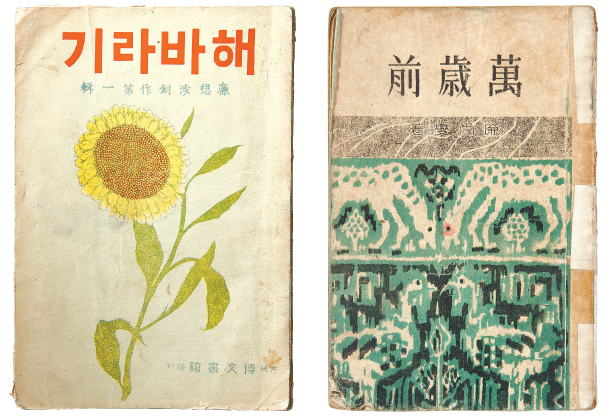 Two of novelist Yom Sang-seop’s early creative works: At left is “Sunflower,” his first creative work. It tells stories of a woman who rejected the customs of dating and marriage. At right is “Mansejeon,” which translates to “Before the Movement.” It describes the time before Korea’s March 1st Movement against the Japanese Colonial Rule and describes what people were willing to endure for freedom. [THE NATIONAL LIBRARY OF KOREA]

For foodies, getting the opportunity to privately enjoy a meal with the chef of a Michelin-starred restaurant may be a more exciting experience than eating a full course meal off the menu on any regular night.

Similarly, being able to check out the lesser-known publications from a famous writer can be a thrill for fans of their work. Until Feb. 25, the National Library of Korea is offering visitors the exclusive chance to read a range of stories from influential writer Yom Sang-seop (1897-1963) at the “2017 Yom Sang-seop Literature Exhibition”.

Yom, a journalist and novelist who wrote fiction that appears in newspapers in the early 1900s, is best known for “Three Generations,” which depicted how a family collapsed under Japanese Colonial rule (1910-45). This particular novel is considered a classic of Korean literature. It has been translated into many languages and is enjoyed worldwide.

Writer Yom Sang-seop, left, is photographed with his daughter in the 1960s. Yom’s most famous novel “Three Generations,” right, has been translated into many different languages including Vietnamese. [THE NATIONAL LIBRARY OF KOREA]

“If we were to take Yom now, we should remember him as a writer who strived to think outside the mainstream through his life’s work,” said the library in its introduction to the exhibition.

“In this exhibition, you can meet Yom, who [used] democracy and the identity of the general public to better understand the nonfiction genre.”

One of the books to check out at the exhibition is “Sunflower,” the very first creative work that Yom released in 1924, depicting a modern-day woman’s ideas on love and marriage. The novel took inspiration from the marriage of Korea’s first female artist Na Hye-seok, who was one of the first women to speak out about issues regarding feminism in Korea.

She denounced many commonly accepted customs regarding marriage, such as living with in-laws, and she even took a honeymoon, which was rare back then. A copy of the original sits behind glass, but replicas are available so that visitors can take a look at the story themselves.

Many versions of “Mansejeon,” which can be translated to “Before the Movement,” are available to view as well. 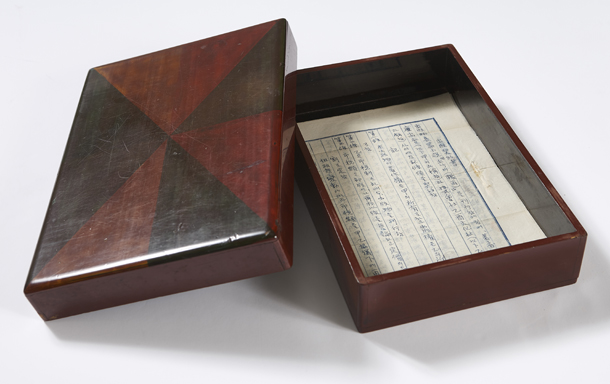 A box belonging to writer Yom Sang-seop, in which he used to keep his writings. For the exhibition, the National Library of Korea is displaying a copy of a publishing contract inside the box. [THE NATIONAL LIBRARY OF KOREA]

This novel, which is often mistaken as the writer’s first novel, is set in 1918, during the winter of the March 1st Movement against the Japanese colonial rule. He created a Korean character who studied abroad in Japan and showed how intellectuals back then longed for ultimate freedom.

Other copies of Yom’s work, including “Gyeonwuhwa,” which is the Korean name for morning glory, is on display alongside some artifacts Yom used, such as a box where he used to keep his writings.

While the beginning of the exhibition takes visitors into Yom’s other works, the exhibit also touches upon his most famous work “Three Generations,” and shows older editions, which were first published in 1947 and 1948.

The “2017 Yom Sang-seop Literature Exhibition” runs until Feb. 25 at the National Library of Korea in Seocho District, southern Seoul. Admission is free. The exhibition is open from 9 a.m. to 6 p.m. from Tuesdays to Sundays. It is closed on Mondays and national holidays.