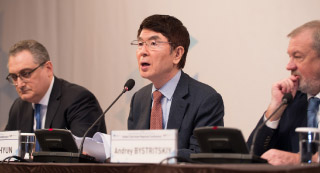 Hyun Jung-taik, center, president of the Korea Institute for International Economic Policy, speaks on Nov. 27 at the Asian Regional Conference co-hosted by the institute and Russia’s Valdai Club to promote the development of Russia’s Far East. To his left is Russia’s Deputy Foreign Minister Igor Morgulov. [YONHAP]

Less attention has been paid to Russia among the global powers around the Korean Peninsula. It may be because three others — the United States, China, and Japan — have bigger and more direct influence over Korea. But that must change. Russia’s policy and actions inevitably impact the Korean Peninsula.

In mid-September, Russia carried out its quadrennial Zapad military exercise in Belarus, a strategically important location neighboring Ukraine, Poland, Lithuania and Latvia. The mass-scale drill was closely watched amid fears that Russian troops might not pull out from Belarus after a weeklong exercise testing the country’s capabilities in defending a fictional territory infiltrated by Western-backed militias — zapad means “west” in Russian. Just 10 days prior to the initiation of the Zapad exercise, North Korea carried out its sixth nuclear test.

Russia is the world’s biggest military power after the United States. It uses its prowess to cause conflict here and there. China may pose a future threat to the United States, but Russia remains its immediate threat. Russia won’t likely backtrack on annexing Crimea. Russian President Vladimir Putin cannot surrender Crimea, whose population is mostly from Russia.

As they could not use military force, Western governments have punished Russia through economic sanctions. That turned Putin toward China. But such a strategy will not benefit Moscow in the long run. The bigger China gets, the weaker Russia will become. Chinese President Xi Jinping’s One Belt, One Road economic expansionism has stretched Chinese reach, pushing out Russia more and more. After the collapse of the Soviet Union, most of the independent states in Central Asia have come under the influence of Beijing. China even formed a cooperative establishment with eastern European states that traditionally fell under Russian influence.

Russia more or less admits it could be outpaced by China in military technology. Cash-strapped Russia even sold off its prized Sukhoi fighter jets to China in November 2015. Russia seems to have resigned itself to the new reality that China sooner or later will absorb its newest military technology.

Russia fears China’s outreach to its Siberian territory. Siberia is a vast mass with a small population. As Manchurian Chinese have been moving into the land, Russians began to consider the option of inviting Korean businesses and people to its Far East territory. It prefers Korea over Japan, The two are still mired in territorial disputes.

The chair of the Valdai Discussion Club — a modern version of the Comintern which acts as a think tank for the Putin government although it is a private organization — said in his recent visit to Seoul that Korea would be a better partner for Russia than China. It is a positive sign that the head of such a powerful organization has made such an overture to Seoul.

It is important that we read the signs and respond to them. Although the country remains under state control, Russia, which has formally divorced from socialism, could be more reliable than China, which remains a communist state.

Closer ties with Moscow could be an immediate help in addressing the North Korean problem. Pyongyang has been courting Moscow to lessen its reliance on Beijing. Its young ruler Kim Jong-un remembers how his grandfather was successful through his balancing act between Moscow and Beijing in the 1960s. We must make a faster move before Pyongyang squeezes in. There is risk in the Siberian development programs, but if we approach with caution, we could be paving out a new frontier both politically and economically.

Most of all, we would be able to restore our dignity at a time when China continues to bully and disgrace our nation. We must grab Russia’s reach and take initiative in exploring a common path that would benefit the two countries.