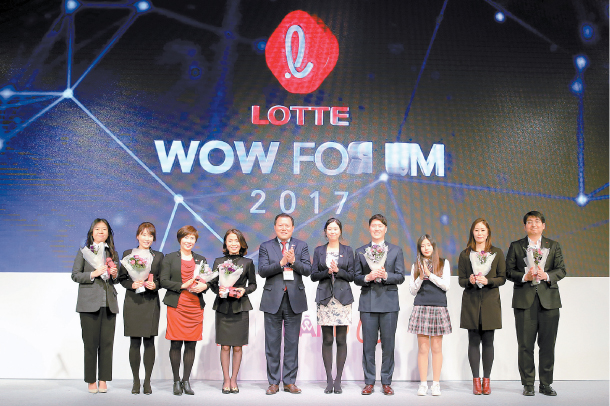 The conference was attended by 500 female talents from the group’s 51 affiliates.

“Lotte Group will strive further to make ‘glass ceiling’ an obsolete term within the group,” said Hwang Gak-kyu, chief of Lotte Corporate Innovation, at the conference.

Hwang added, “Chairman Shin Dong-bin has a strong determination to make women-friendly policies within the group.”

At the conference, Lotte announced some of the key results achieved since the group’s female leadership initiative launched in 2005.

The retail giant said 40 percent of employees hired this year were female. In 2005, that figure was 5 percent.

Currently, 30 percent of Lotte’s employees are female, the company said.

Allowing male workers to take paternity leave was another key policy announced by the group last year, guaranteeing full base payment for the first month of their absence.

Lotte said that roughly 1,100 male workers have taken paternity leave as of Dec. 18, 2016, since the policy launched.

“The number of male employees who file for paternity leave jumped six times compared to last year, when only 180 people applied for it,” said a spokesperson for the company.

Kim Young-baek, the 1,000th male employee to take paternity leave at Lotte, said the new policy allowed him to be of more help to his family.

“When my first child was born, I couldn’t spend much time with my wife,” said Kim at the conference. “But with my second child, I was able to take care of my first child. I am planning to use the rest of the paternity leave when my family needs me.”