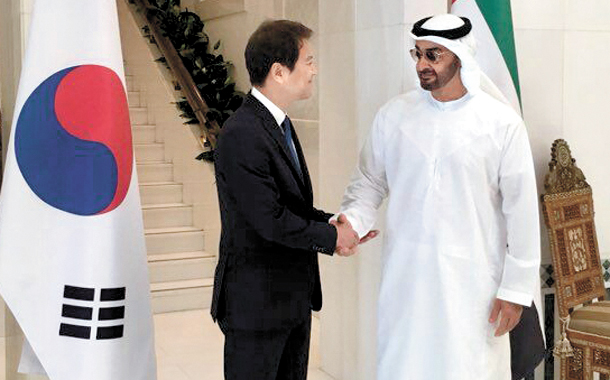 A controversy has arisen over the presidential chief of staff’s abrupt visit to the United Arab Emirates (UAE) despite the Blue House’s claim there was no diplomatic emergency between the two countries.

President Moon Jae-in dispatched Im Jong-seok, Blue House chief of staff, as a special envoy to the UAE and Lebanon earlier this month. Im left for the UAE on Dec. 9 and visited Lebanon on Dec. 11.

The Blue House claimed the trip was to cheer up Korean troops in the two countries and improve bilateral ties with the Middle Eastern partners. But Defense Minister Song Young-moo visited those troops just last month, and the Blue House only announced Im’s trip on Dec. 10, after his departure.

Opposition politicians argued that Im was sent to calm a diplomatic row with the UAE, and that Korea’s ties with the Middle Eastern nation were in jeopardy due to the Moon administration’s campaign against former President Lee Myung-bak.

During the Park Geun-hye administration, Kepco also won another bid in 2016 to operate the Barakah plant. The deal is expected to bring $49.4 billion in revenue to Kepco for the 60-year contract period.

“The UAE crown prince was reportedly furious that the Moon administration was spreading rumors about a corrupt nuclear plant deal and threatened to cut diplomatic ties,” Rep. Kim Sung-tae, floor leader of the Liberty Korea Party, said Thursday. “The UAE was planning to send a delegation to Korea, so Im was sent urgently to calm the situation.”

“It is a widely-known fact in the diplomatic community that officials of the Moon administration were spreading rumors that the UAE royal family and former President Lee made a corrupt deal over the nuclear plant bid, and the UAE fiercely complained about it,” Ahn Cheol-soo, chairman of the People’s Party, said Friday. “If the Blue House sent Im to resolve the situation, it must brief the public about the outcome. You can’t just hush it up.”

A Blue House official said Monday that Im’s trip to the UAE was intended to stress the partnership between the two countries. “There was no mention of specific projects such as the nuclear plant deal,” he said.

Suspicions snowballed after the media in the UAE showed footage of Im meeting with UAE leaders included an official in charge of the Barakah plant. Im met with the Crown Prince of Abu Dhabi, Sheikh Mohammed bin Zayed bin Sultan Al Nahyan, on Dec. 10, and Khaldoon Khalifa Al Mubarak, chairman of the Emirates Nuclear Energy Corporation.

“Media reports that the UAE was going to send a delegation to protest are groundless,” a presidential aide said. “It is also not true that Im went to the UAE to resolve their complaints.” The official said the nuclear project is proceeding smoothly.

Rep. Kim pressured the Blue House on Monday to give a more convincing answer. He said the Moon administration has caused a diplomatic dilemma and harmed national interests by attacking former President Lee with groundless rumors in order to legitimize its policy to phase out nuclear energy in Korea.

In October, the government announced a road map in which the number of nuclear reactors in Korea would be reduced to 14 from the current 24 by 2038, scrapping plans to build six new reactors. Safety concerns and a campaign to fight corruption in the nuclear industry were presented as key reasons. Kim said the Liberty Korea Party will call a House Steering Committee hearing and ask Im to testify before lawmakers about his visit to the UAE. The People’s Party and Bareun Party agreed to the plan.

The ruling Democratic Party resisted the idea. “There was no agreement between the ruling and opposition parties, so Im doesn’t have to testify,” it said. While the controversy grows, Im is conspicuously absent from work. The Blue House said he is on vacation starting from Monday through Thursday.